Ireland’s International Rules manager Joe Kernan has outlined the challenges that he and his charges face in the upcoming match against Australia, while also launching an impassioned defence of a game that inspires indifference in so many GAA fans.

Injury and club commitments have made Kernan’s job a demanding one, but the Crossmaglen legend has been happy with how his players have been able to serve two mistresses thus far.

“We’ve had eight sessions so far, but in the middle of that there’s club championships,” he told RTÉ Sport.

“Even this weekend there’s club championships. You’re hoping nobody gets injured and that the club will allow players to come.

“We’ve got through it, we’ve worked with them and we’ve the squad we want.

“We’ve had a few injuries along the way, the likes of big names like Michael Murphy and Sean Cavanagh, who’ve had injuries, Brain Fenton and Cian O’Sullivan.

“You can’t plan for that but that gives opportunities to other players, and the players we’ve had in have worked really hard.

“Every Friday night we play matches and we put players in different positions and we’re trying to get the best blend we can.

“The important thing is that the boys play together and sharpen up on the rules.

“But it’s getting those things back in again. Our kick-passing has improved immensely over this last eight weeks, so that going to be an important part of our game.”

“To manage your country is something special. Not everyone gets the chance to do that and manage the best players in the country.

“That’s what makes us as management want to be here; to work with the best and hopefully get the best out of the best.

“If we do those things were in with a great chance.”

The 61-year-old also believes that improving the reputation of the game falls on the participants.

“Australia have a big part to play and they’ve certainly played a big part the last two years with the teams they sent over last year and this year,” Kernan added.

“We have to match that - if we match that it will be a competitive game and people will want to come and see it.

“That’s what we ask the supporters every year - come and watch it this year and see what you think and if we can perform at a high level, and hopefully win, they’ll also want the game to continue and they’ll turn out to see it.” 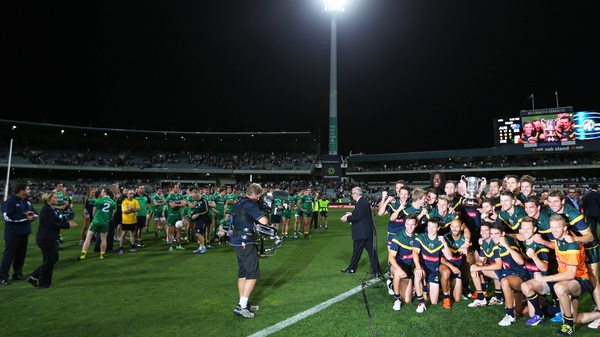