Portlaoise delivered for the second time in 20 hours, as they claimed a 0-15 to 1-08 win over Palatine in the AIB Leinster SFC at Netwatch Cullen Park.

Malachy McNulty’s side showed class, as their experience shone through to book a date with Kildare champions Sarsfields in the quarter-finals in a fortnights time.

Fresh from delivering their ninth Laois SFC title in-a-row, after a replay win over Emo in the decider, Portlaoise set their sights on taking another scalp. In contrast this was just Palatine’s second ever time in provincial action.

While they were tested at times by the Carlow champions, managed by their former boss Mick Lillis, father of Portlaoise captain Kieran, the O’Moore County outfit held out for victory.

Portlaoise made just one change to the team which beat Emo by 2-13 to 0-07 the previous evening, with Brian Glynn starting in place of Zach Tuohy.

While Portlaoise had four points to spare in the end, this game was tight in the opening half, with the sides level on four occasions, before Portlaoise took the lead at the break.

This game got off to a tense start, with just three scores in the opening quarter, as Palatine moved 0-02 to 0-01 ahead, with Brian Kelly edging the Carlow side in front.

Heavy rain prevailed for large parts of this contest, with the sides level at 0-03 each and 0-04 each, before a Craig Rogers point handed Portlaoise a 0-05 to 0-04 half-time lead.

Indeed a telling statistic at the break was that all of Portlaoise’s scores had come from play in the opening half, where Palatine’s quartet of points all arrived from placed balls.

Portlaoise took stronger control on the restart, with Brian McCormack, substitute Ricky Maher and Rogers on target to ensure an 0-11 to 0-07 score-line in the 45th minute.

Palatine weren’t finished, with a punched goal from Shane O’Neill bringing them back into this contest.

However this was their final score, as Portlaoise finished strongly with points from Healy and Cahillane to ensure a quarter-final date with Sarsfields. 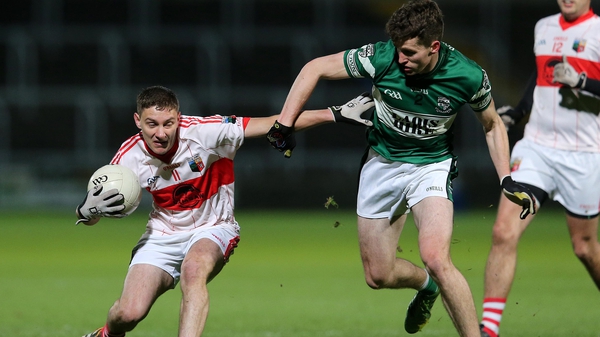 Portlaoise too strong for Emo in Laois replay