The Rebels claimed the five-in-a-row at Croke Park this afternoon, scoring a two-point victory over Dublin in front of a bumper 31,083 attendance.

Cork made their move after half-time, reeling off four unanswered points to build a match-winning lead in what was largely a defensive affair.

Dublin battled all the way to the finish but couldn’t do enough to prevent a second successive final defeat against Cork.

For Dubs boss Gregory McGonigle, it’s another bitter pill to swallow as he was also in charge of the Monaghan teams beaten by Cork in 2011 and 2013.

McGonigle and Dublin were quietly confident of avenging last year’s agonising defeat, when Cork came from ten points down in the final quarter.

But Cork had the wherewithal and nous to close out another tight encounter, as dual stars Briege Corkery, named player of the match, and Rena Buckley tasted All-Ireland senior glory for the 16th time.

The duo featured in each of Cork’s ten football wins and have also captured six senior camogie medals.

Cork lost Doireann O’Sullivan to the sin bin in the final minute but it mattered little as Eamonn Ryan’s charges effectively wound down the clock to secure the Brendan Martin Cup yet again.

The sides were level at the end of a first half that threatened to explode but never really did.

Cork had a brace of frees from leading scorer Valerie Mulcahy, who also kicked a couple of poor wides, with Buckley, skipper Ciara O’Sullivan and O’Sullivan on target from play.

Cork suffered a blow after 15 minutes when Geraldine O’Flynn, the match-winner last year, went off to be replaced by Róisín Phelan.

But Cork absorbed the blow and went in at half-time level at 0-5 apiece, before unloading with a decisive burst after the restart.

Mulcahy scored three and O’Sullivan added another as the Rebels moved into a 0-9 to 0-5 lead.

Points from Amy Connolly and Lyndsey Davey had Dublin back on track but the Sky Blues could never get level despite cutting the gap to just a point.

Mulcahy missed another free midway through the half, and dropped another short, but Dublin couldn’t capitalise on Cork’s profligacy with scores of their own at the other end.

Cork were in merciless form at the back, hellbent on ensuring that Dublin wouldn’t find a way through for what would prove to be an elusive goal.

McGonigle emptied the bench as Dublin searched for a way back into contention but Cork had done enough to retain the silverware. 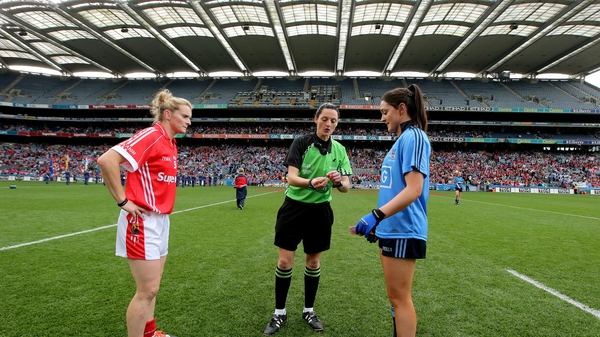