Three goals in the final fifteen minutes at Croke Park saw Dublin come from behind in thrilling fashion to edge out Mayo and book their All-Ireland final spot.

The 2013 champions trailed by four points with 55 minutes on the clock and looked in serious danger of missing out on a 20 September Sam Maguire showdown with Kerry.

But having been held to a draw last Sunday, the Dubs summoned all of their character, and no little quality, to speed past Mayo in the closing minutes.

Bernard Brogan tied the scores with his 56th-minute goal before a second from corner-back Philly McMahon - who finished with 1-02 - shortly after.

Mayo had no response and super-sub Kevin McManamon grabbed Dublin's third goal with three minutes remaining, taking his tally to 1-01 by full-time.

It was a stunning display of firepower from Dublin who will now face the Kingdom in a repeat of the 2011 final.

McMahon was superb, expertly shackling Mayo danger man Aidan O'Shea, aside from his scoring exploits, while Brian Fenton was a powerhouse in midfield and Paddy Andrews kicked five points from play.

Dublin included Diarmuid Connolly in their line-up after his appeal to the Disputes Resolution Authority against his red card in the drawn game was successful late on Friday night.

He had previously failed with two attempts to overturn his straight red card for striking Lee Keegan last Sunday. But the DRA, chaired by former supreme court judge Hugh O'Flaherty, ruled that there was a 'lack of fair procedure' at an early stage of Connolly's appeal and cleared him. 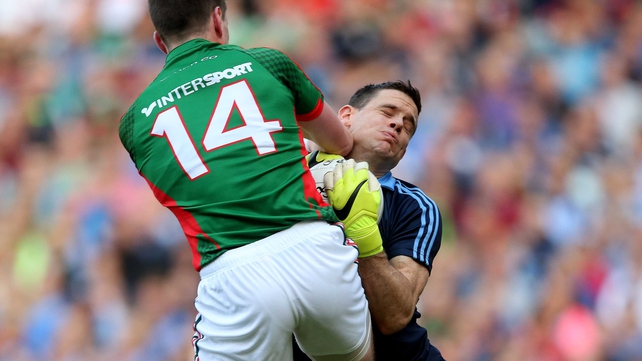 Alan Brogan was initially named to play but Connolly started instead and was roundly booed by Mayo fans each time he got the ball.

In truth, Connolly was a peripheral figure as an exciting game played out around him. Andrews was Dublin's key forward in the first-half with four points, all from play, and all from tricky angles.

Bernard Brogan was sharp too and fired the opening point as well as playing a sumptuous pass over the top that put McMahon in the clear in the 20th minute. But the defender fumbled his catch and blazed over the bar.

Dublin kicked three points in-a-row at one stage but it was generally tit-for-tat stuff and the sides were unsurprisingly deadlocked at half-time, 0-10 to 0-10.

Cillian O'Connor was Mayo's chief scorer again, mainly from frees, though Kevin McLoughlin and Diarmuid O'Connor got on the score sheet too.

O'Shea was man-marked by McMahon again and fired a point from play but didn't dominate as the five-in-a-row Connacht champions hoped.

He was quiet throughout the second half too though Mayo still managed to pull four clear in the third quarter of the game.

But all of that changed in a blitzkrieg few minutes as the three-in-a-row Allianz league champions opened up with some stunning football. 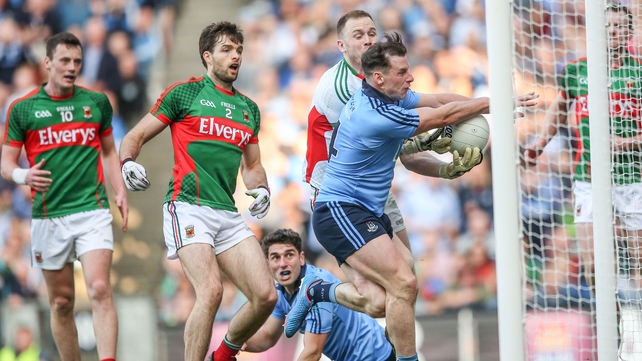 Bernard Brogan was first to hit the net, redirecting Fenton's misplaced shot to the net before turning provider soon after with a lung bursting run along the left end line and pass across goals for McMahon to palm in.

Suddenly, Dublin were the ones lead by four, 2-13 to 1-12 and stretched the gap to five with seven minutes remaining.

McManamon killed the contest in the 67th minute with a thundering third goal for Dublin, flashing a left footed shot beyond Rob Hennelly from the left of goals after a probing run by Fenton.

Subs: MD Macauley for Bastick, M Fitzsimons for Cooper, A Brogan for Flynn, K McManamon (1-01) for Rock, E Lowndes for Connolly, J Small for B Brogan. 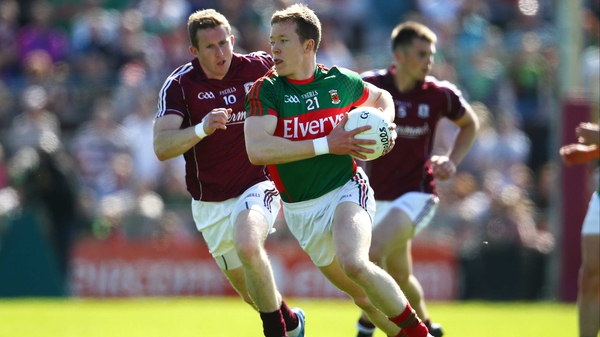