This weekend's All-Ireland hurling final will be the 41st championship meeting between Kilkenny and Galway.

The Cats lead the way with 32 victories, though the westerners have taken much satisfaction on the days when they lowered the Black and Amber colours.

We look back at some compelling fixtures that have underscored this rivalry in the last 40 years.

After shocking Cork in the semi-final and getting through to their first decider since 1958, there was much expected of league champions Galway. However, apart from the opening 20 minutes when Frank Burke goaled to put them ahead, the Connacht side failed to raise any sort of a gallop on a day in which Kilkenny maestro Eddie Keher won his sixth All-Ireland medal.

Keher bagged 2-07 of Kilkenny's total, with Mick Crotty and Liam 'Chunky' O'Brien also finding the range to ensure that the Cats comfortably won a 20th title. In defence, Fan Larkin, Pat Lalor and one Brian Cody all had superb games.

After winning Liam MacCarthy in 1974, it was Kilkenny's first 'double' since 1932-33 and a third title in four years.

After defeats in the 1985 and 1986 deciders, Galway hurlers stood tall in a nerve-jangling contest where space was at a premium. The pre-match talk was of a high-scoring contest, yet the scoreboard operator had a far from taxing afternoon.

The only goal of the game came late on from Galway's Noel Lane. A sigh of relief followed from the Tribes faithful, and then unbridled jot at the final whistle as Cyril Farrell's men finally got over the line in an All-Ireland final.

Lane's goal was one of the few times the Kilkenny defence was caught out of position. Midfielder Steve Mahon's clearance found Eanna Ryan, who went on a darting run and then passed to Joe Cooney, bearing down on the Cats goal.

Ryan was expecting a return from Cooney but the ball passed him by. Lane, at an angle to the goal, shot hard at the body of Kilkenny goalkeeper Kevin Fennelly. The custodian could not prevent the ball trickling over the line. Galway finally got the breathing space they needed. 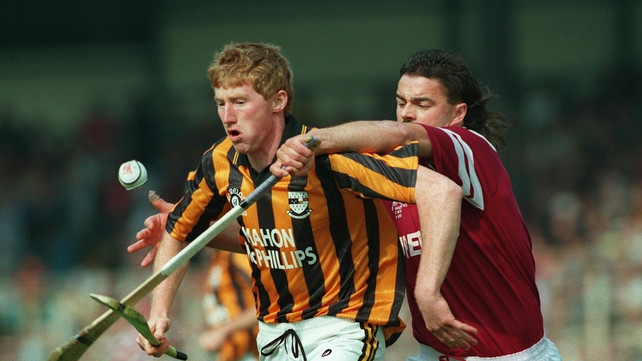 The Cats survived a stern challenge here to win their 25th title. Pat O'Neill had an outstanding game at centre-back for the victors. Credit must also go to team captain Eddie O'Connor, Pat Dwyer, Liam Simpson, Liam Keoghan and Willie O'Connor, while Padraig Kelly's performance at half-back for Galway and the number of times he nullified Kilkenny raids, should also be noted on a day when a tricky breeze threatened to spoil things.

Adrian Ronan and PJ Delaney got the goals for the winners, with Delaney's green flag crucial in finally breaking Galway's resistance after 67 minutes.

Galway deservedly got the better of the reigning champs, despite playing with 14 men for more than 40 minutes. Gregory Kennedy was sent-off for a second bookable offence in the 28th minute, but from there to the finish, the Connacht men outscored the Black and Amber by 1-11 to 1-08.

Eugene Cloonan hit 2-09 for the victors, with Henry Shefflin firing over 0-09 from frees for a Kilkenny side who simply had no answer to Galway's desire on the day.

Yet, those that were present will surely remember Kevin Broderick's wonder point for the Tribesmen.

Goal-hungry Galway upset the odds at Croke Park to book their place in the All-Ireland SHC final for the first time since 2001, amazingly seeing off favourites Kilkenny in what was a compelling contest.

The Tribesmen turned in a huge display in front of 39,975 with a hat-trick of second-half goals from Niall Healy sealing their passage to the decider.

However, it was young Ger Farragher's display at corner-forward that will live long in the memory, as the Castlegar club man came away with 2-09.

Kilkenny were left playing a game of catch-up right until the final whistle, though they did fight bravely, as exemplified by their efforts in whittling away an 11-point advantage that Galway held at one stage. 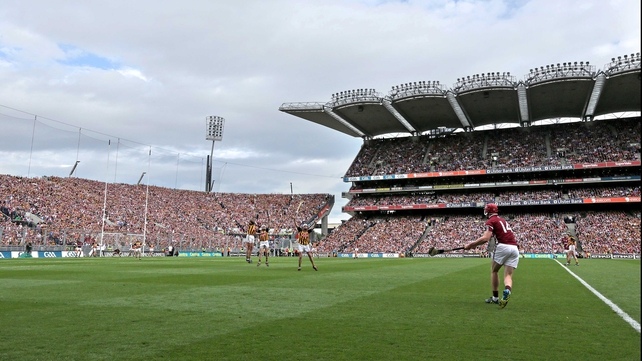 Joe Canning struck a stoppage time equaliser to send the All-Ireland final to a replay for the first time since 1959.

Canning smashed home a brilliant 10th minute goal, and his 1-06 tally helped the Tribesmen to a 1-09 to 0-07 interval lead, with Henry Shefflin converting four Kilkenny frees.

The Cats went in front, before Niall Burke fired in Galway’s second goal. Shefflin finished with 12 points, but Canning’s 1-09 tally dictated that two teams had to meet again following a superb encounter.

The replay saw Kilkenny win comfortably on a 3-22 to 3-11 scoreline. Championship debutant Walter Walsh wrote his name in large print over the showpiece occasion, claiming a 1-03 haul to announce his arrival on the senior stage in spectacular fashion.

Three late goals crowned an astonishing late comeback from Galway as they rescued a replay with Kilkenny after a memorable finish in draw at O'Connor Park, Tullamore.

Two Conor Cooney goals and one from a Joe Canning penalty drew the sides level with time running out only for Henry Shefflin to give Kilkenny the lead once more from an acute angle.

However, when all looked lost once more for the Westerners, Canning stepped up to send over an identical point from the tightest of angles.

Just two points separated the sides at the break, but four points in a row after the restart from Brian Cody's side and Aidan Fogarty's 52nd minute goal clinched the win.

Galway relied heavily on Conor Cooney's accuracy to remain in touch, but Reid's second goal in injury-time ensured there would be no repeat of the previous week's late heroics. 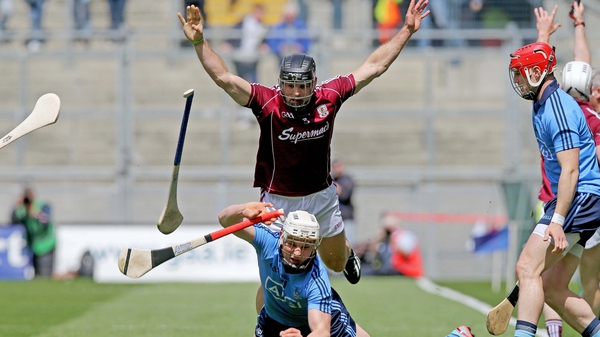