Holders Kerry made a serious statement of their All-Ireland title intentions with a seven-goal bashing of Kildare at Croke Park to cruise through to the semi-finals with the minimum of fuss.

But the big win that secured an August 23 semi-final clash with Monaghan or Tyrone was tempered by the loss of star forward James O'Donoghue.

The reigning Footballer of the Year went off late in the first half with a potentially serious shoulder injury having missed the early part of the season with the same problem.

Kerry boss Eamonn Fitzmaurice will await a full medical diagnosis realising that the loss of O'Donoghue for a long period could potentially derail their Sam Maguire challenge.

It was all positive other than that with ex-AFL star Tommy Walsh and Paul Galvin even coming on for much needed game time.

Kerry sprung a surprise before throw-in with Cooper recalled to the team in place of captain Kieran Donaghy. Cooper started at corner-forward and Paul Geaney manned the edge of the square with O'Donoghue in the left corner. 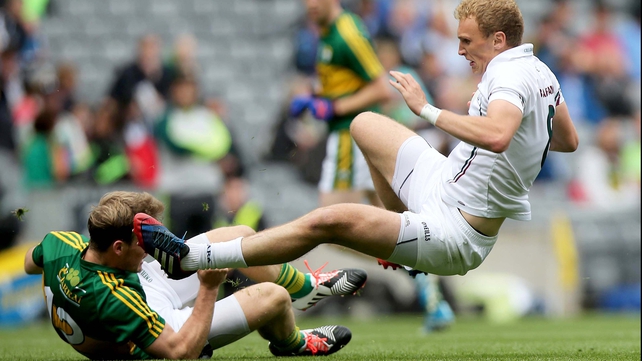 David Moran took the armband for the day and, initially, it was all plain sailing with O'Donoghue opening the scoring after just 10 seconds.

But O'Donogue's day would take a turn for the worse approaching the half-hour mark when, with three points already kicked, he bore down on goal and attempted to round goalkeeper Mark Donnellan.

O'Donoghue, with a history of shoulder trouble, went crashing to the ground and immediately signalled to the bench that his race was run. Replays showed a terrific intervention by Donnellan, though the attacker left the field clutching his shoulder and was replaced by Keane.

In his absence, it was pretty much business as usual for a Kerry side that moved 0-10 to 0-3 ahead by half-time. Cooper won a free that was converted by O'Donoghue and shot a point from play also but Stephen O'Brien was the real form player up front for Kerry.

The Kenmare man fired over four points from open play and with Kildare wondering how to possibly contain him Cathal McNally dropped deep into defence to pick him up.

Kildare found the going difficult and didn't score until the 17th minute. Niall Kelly got that one and added a second as the Lilies got the gap down to two at 0-5 to 0-3.

But five unanswered Kerry points in a row including two from O'Brien left the Munster champions in a strong position at the break.

Kildare needed a strong third quarter performance to claw their way back into the game and a Smith point was a positive start, reducing the deficit to six.

But Kerry's opening goal from Donnchadh Walsh arrived shortly after and it was all down hill from there for the Leinster outfit.

Remarkably, Kerry would score six goals in a blitzkrieg 17-minute period to put the result beyond doubt long before full-time.

Cooper got the first, after great work by sub Darran O'Sullivan and the pair reversed the arrangement for Kerry's third goal, scored by O'Sullivan.

Barry John Keane tapped in a soccer-style finish after Walsh's ball across for Kerry's fourth before Cooper nailed his second.

O'Brien got their sixth 13 minutes from time, a neat finish to the corner of the net after a one-on-one with Donnellan. The seventh arrived courtesy of O'Sullivan in injury-time.