By Declan Rooney at Croke Park

Joe Canning lit up Croke Park with a stunning first-half goal for Galway, but Kilkenny found the scores easier to come by and wrapped up their 70th Leinster hurling title with a 1-25 to 2-15 victory over the Tribesmen.

TJ Reid hit 1-09 for the Cats including a 28th minute goal, and led 1-11 to 1-08 at half-time, but Galway levelled matters when substitute Jason Flynn goaled two minutes after the restart.

However, Galway never led after the sixth minute as Kilkenny eased their way into the All-Ireland semi-final and handed a third provincial final defeat to the Tribesmen.

Immediately it was clear that both sides came into this encounter with massive physical intentions. High octane tackling has been a real feature of Galway's championship to date, while Kilkenny are regarded as masters of that facet of the game.

But they are also known as the game's finest stick men too and two quick-fire points from Walter Walsh and Ger Aylward got the Cats into an early 0-02 advantage.

But Galway soon settled and straight from the puckout Colm Callanan picked out Jonathan Glynn and the powerful forward hit Galway's first score in the second minute.

A sweet diagonal ball from Aidan Harte picked out Cathal Mannion who drew Galway level soon after, and the Tribesmen took the lead in the sixth minute when Joe Canning landed his first free.

The heavy hits continued to rain in – the meeting of Kieran Joyce and Glynn was particularly shuddering – while excellent hooks at each end from Daithi Burke and Joyce denied certain scores.

TJ Reid started at the edge of the square for Kilkenny in a move brought about following the late withdrawal of Michael Fennelly, and Reid and Canning swapped frees as the game continued to be a tight battle.

Significantly, between the 17th and 26th minutes Kilkenny took control and hit five of the next six points, the pick of them a great score from Conor Fogarty, who scythed through the heart of the Galway defence.

Seven minutes from the break Kilkenny surged further clear when Reid rounded Callanan to goal following Aylward's pass, a score which gave the All-Ireland champions a 1-10 to 0-06 lead. 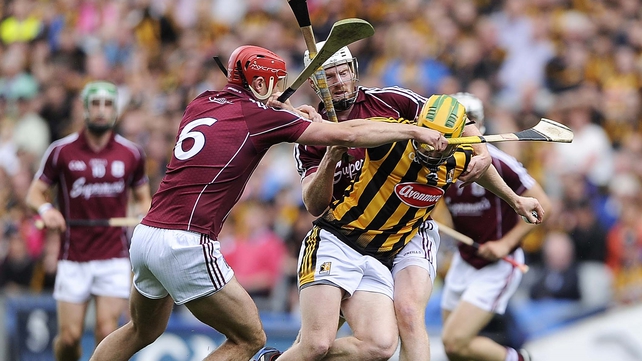 Firstly, David Burke landed an impressive point from an acute angle before Fergal Moore drilled over a score from halfway. But the best was still to come three minutes from the break.

A long delivery from Andy Smith was sent towards Canning at the edge of the square. He caught the ball with his back to goal, turned immediately and fired a bullet past Eoin Murphy. How he found the target when shooting on the spin and off balance was a mystery, but Galway would have been happy to only trail by 1-11 to 1-08 at half-time.

Kilkenny could have been well clear at half-time but eight wides meant they didn’t get the return their attacking play deserved. And two minutes after the restart they were punished as Galway goaled again.

Once more it was a long ball from Smith that produced the opening, but with the Kilkenny defence attracted to Canning, Flynn crept in behind the cover to hit the net and level the scores.

And while the sides swapped points for the following five minutes Galway could never take the lead. Instead Kilkenny took control with five points in a row with 20 minutes to go.

A mini Galway rally instigated by Cyril Donnellan brought Galway back to three points behind with eight minutes remaining, but the Cats his four points from play in the closing stages to wrap up the win.