Sean Quigley produced a finishing masterclass with a 14-point haul to send Fermanagh through to round 3A of the All-Ireland Football Championship qualifiers with a 1-21 to 0-11 win over Antrim at Brewster Park.

Quigley’s seven points helped the Erne men to a 0-11 to 0-05 interval lead, and they sealed victory with Marty O’Brien’s 55th-minute goal.

A pre-match downpour made footing and handling difficult, but the finishing in the opening stages from both sides was quite exceptional.

Quigley eased the Ernemen men in front, and Tomas Corrigan spun away from his marker to slot over a point, but on each occasion, Michael Pollock took advantage of sloppy defending to bring the Saffrons level. 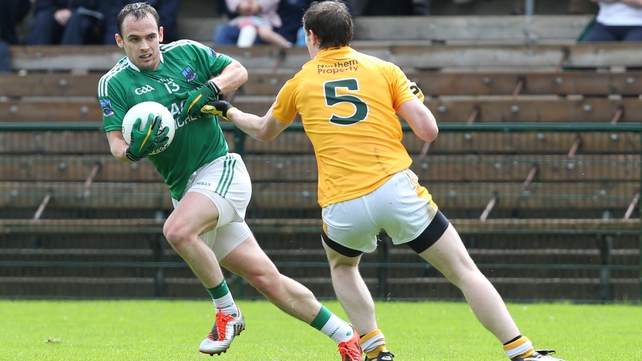 Fermanagh’s defensive set-up was complemented by O’Brien’s ability to break at explosive pace from deep, and he set up the move that gave Quigley the opportunity to level from a free in the 11th minute.

Eoin Donnelly’s influence around the middle was giving the home side an edge, and when Quigley arrowed over his third score, they led by 0-05 to 0-03 with 14 minutes on the clock.

Antrim were struggling to get the match-ups right, with a third maker now on Quigley, and they were breached yet again when substitute Daniel Kille sent Paul McCusker in for a point.

And when corner-back Niall Cassidy pushed forward to score, they led by 0-08 to 0-03.

Antrim’s attacking efforts were fragmented and lacking in shape, and they went 23 minutes without a score, until substitute Niall McKeever sent a gem soaring between the posts.

But Fermanagh led by  0-11 to 0-05 at the break, after Antrim goalkeeper Chris Kerr had pulled off a blinding save to deny McCusker. 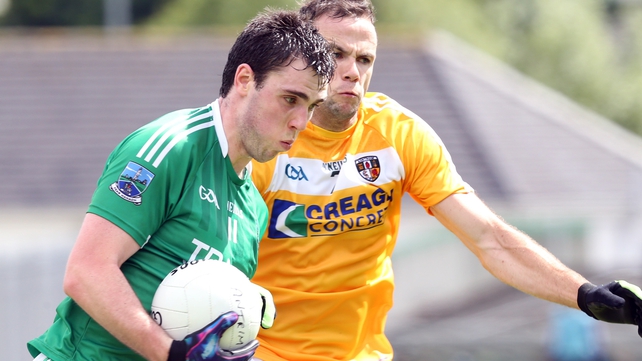 Quigley was unplayable and unstoppable.

Now being tracked by the experienced Justin Crozier, he struck two more wonderful points from play in the opening three minutes of the second half, before bringing his tally into double figures with a 47-metre free.

But Antrim hopes were dashed when O’Brien netted a 55th-minute goal, finishing the loose ball to the net after he had momentarily lost possession.

Quigley continued to thrill with his audacious finishing, bursting with confidence each time he got on the ball to send it sailing between the posts.

He received an ovation when substituted a minute from the end, job done, and Fermanagh polished off in style with late scores from substitutes Conall Jones and Sean McManus.