Derek McGrath’s Waterford have beaten 14-man Cork in Thurles on a 3-19 to 1-21 scoreline to book their place in the Munster Hurling final on 12 July.

Waterford won the Allianz League final meeting between the counties five weeks ago and followed that up with another fine display in front of 21,047 spectators in Thurles this afternoon.

Just like he did in the league decider, Tom Devine came off the bench to score a crucial goal for the Déise.

Patrick Horgan’s injury-time penalty had brought Cork to within two points but Devine jabbed home a priceless goal in the second minute of stoppage time to provide Waterford with a safe passage to next month’s provincial decider against Limerick or Tipperary.

Cork lost Luke O’Farrell to a red card six minutes from time, following an off-the-ball clash with Barry Coughlan and the Leesiders played out the remainder of the game a man light.

But that’s no excuse on an afternoon when Cork were outthought and outfought by Waterford once again, with McGrath’s men through to a first Munster final since 2012.

Maurice Shanahan was the scoring star on the day, taking over free-taking responsibilities from injured Pauric Mahony and finishing with a personal haul of 1-9.

At the end of a first half pockmarked by 17 wides, nine of those to Waterford, the Déise had recovered from four points down to lead by 2-06 to 0-11.

Without talisman Mahony, Waterford missed a couple of early frees, Austin Gleeson and Shanahan off target, but after falling 0-02 to 0-06 behind, they came roaring back.

Stephen Bennett had forced an eleventh minute save from Anthony Nash but the Cork goalkeeper picked the ball out of his net twice before half-time.

Waterford finally registered their first point from play in the 25th minute and they followed up with two goals in three minutes.

Austin Gleeson’s ball was fetched by the impressive Shanahan over the head of Damien Cahalane and the Lismore hitman cracked a superb rising drive past Nash.

Cork were opened up in alarming fashion again as Stephen Bennett’s crossfield ball allowed Michael Walsh to provide Jake Dillon with a clear run on goal. 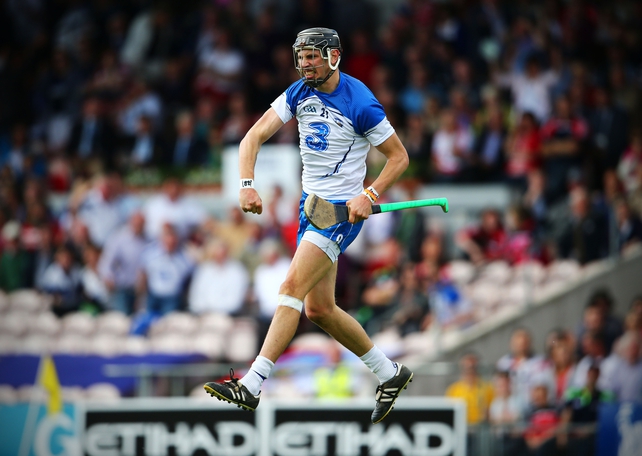 Dillon forced a good save from Nash in the 31st minute as Waterford hit Cork in waves but after Shanahan’s resultant 65 opened up a four-point gap, 2-6 to 0-8, Cork hit the remaining three points of the half.

Impressive Patrick Cronin scored his third before Aidan Walsh and Alan Cadogan raised white flags to keep the Leesiders very much in touch at the short whistle.

Waterford opened the second half with intent, two Shanahan frees and a Colin Dunford effort opening up a four-point gap.

Jimmy Barry-Murphy’s Cork were awarded a controversial point when Patrick Cronin’s effort was waved over by the umpire, as play continued at the other end of the field.

But Waterford refused to be blown off course and with brothers Stephen and Shane Bennett scoring vital points, they remained the most likely winners.

O’Farrell’s red card capped a miserable afternoon for Cork, who are left to pick themselves up in the qualifiers.