By Kevin Egan at Offaly

Longford gained revenge for their Allianz League Division 4 final defeat to Offaly just three weeks ago when an unlikely late comeback gave them a 0-16 to 0-13 win over the hosts in a fiercely-contested Leinster Senior Football Championship first-round tie at O’Connor Park in Tullamore.

The narrative all week in the lead-up to the match was that a victory would a poisoned chalice, as the winners would then be forced to travel to Croke Park to take on overwhelming favourites Dublin in the provincial quarter-finals.

Offaly played some stunning football for 25 minutes either side of half-time, but the other 45 minutes of action yielded a mere three points for the Faithful County, who were heavily hit by the loss of midfielder Niall Smith (black card) and full-back Paul McConway (injury).

Longford manager Jack Sheedy opted to radically overhaul his team in the aftermath of their heavy league final reversal and that yielded spectacular results as debutants Barry McKeon and Paddy Collum stepped up with crucial interventions, while Ross McNerney and Dessie Reynolds kicked four points off the bench between them.

McKeon and Ronan McEntire were among the early scorers as Longford built up three-point lead before their opponents got off the mark, and while Niall McNamee and Nigel Dunne kicked scores to break Offaly’s early run of four wides, Longford kicked on again to restore their three-point advantage.

A free from all of 60 metres by Graham Guilfoyle in the 24th minute got Offaly back on the front foot and from that moment until half-time they looked like they could do no wrong when moving forward in possession.

However, it was his namesake and club colleague Alan Mulhall who was Offaly’s real hero as he produced a great diving save to deny Michael Quinn from the penalty spot.

A wild tackle by Daithí Brady on Shane Doyle led to Padraig O’Sullivan making the easy decision to award the spot-kick, however Mulhall’s stunning save kept the momentum with Offaly up until the half-time break, when they led by 0-09 to 0-05.

That advantage was stretched even further after the restart when Bernard Allen kicked two scores, one from play and one from a free, and when Nigel Dunne punched the ball over the bar to put them seven clear with 24 minutes remaining, few would have given Longford any chance of retrieving the situation.

Two frees in as many minutes broke Longford’s run of nearly 25 minutes without a score, a spell in which Offaly had added 10 points without reply.

Brian Kavanagh’s influence became a huge factor in the encounter once Offaly captain Paul McConway was forced to go off with an injury, while Longford also took control of the Offaly kickout and played the vast majority of the game in the Offaly half of the field.

While the league final between the two sides was hallmarked by Longford’s inability to kick scores from range, in Tullamore the visitors piled through open country to pick off scores from between 30 and 45 metres from goal, with Colm P Smyth, Diarmuid Masterson and Peter Foy all on target after running through from deep positions.

Once Longford drew level, Offaly were forced to chase the tie and then even more space opened up for Jack Sheedy’s side, who tacked on three late points.

A late chase by Offaly did create their first goal chance of the evening, but Longford’s debutants were up to the challenge when needed. This time it was Paddy Collum who justified his inclusion, diving low to save Conor McNamee’s late punch that looked destined for the bottom corner of the net. 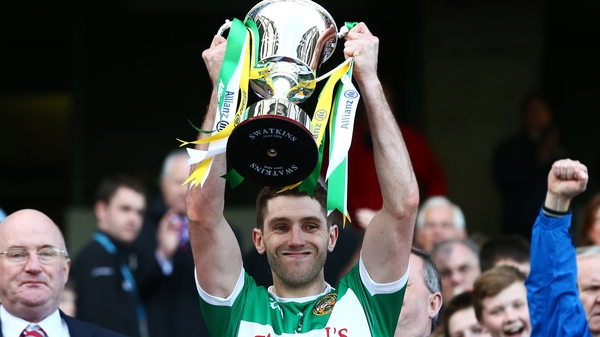