Laois saw off Carlow’s challenge with a 1-17 to 1-14 win at Dr Cullen Park in today’s Leinster SHC qualifier Round 2 clash.

Laois had gone in 0-07 to 0-05 ahead at the break and the visitors pulled away in the second period, establishing an 11-point lead before Carlow fought back to close the gap to three points by the final whistle.

The match was highlighted by two goals, Ben Conroy smashing home in the 39th minute for the O’Moore men and Eddie Byrne netting for the home side late on.

This was a championship game low in quality for the attendance of 2,000. The tricky wind made good hurling difficult but hardly explained the inordinate number of sideline cuts produced over the course of the game.

It was pretty much score for score in the opening half with the visitors establishing a two-point interval lead of 0-07 to 0-05. The half was a tale of the two free-takers, Laois midfielder Zane Keenan and Carlow's Marty Kavanagh.

Generally both defences were on top with neither full forward line able to make any significant impact. The only score from play from either inside starting division was Seán Murphy's point on the hour mark.

The game turned in favour of Laois in the opening minutes of the second half. A Zane Keenan point from a free was supplemented by another from Ben Conroy. Then in the fourth minute a low trajectory free from Keenan caused confusion in the Carlow defence and Conroy scrambled the ball to the net.
Laois, buoyed by those scores went on to dominate and were a clear 1-15 to 0-07 ahead by the 54th minute.

But Carlow finished the tie strongly, picking off a succession of points before the rangy Eddie Byrne kicked a goal just as the game was about to enter injury time. While there was a slight chance of a levelling goal a confident save from Laois netminder Enda Rowland signalled the end of the game.

Overall this was a lack-lustre championship tie which produced little in the way of quality but there was one memorable score when Carlow midfielder cut a long-range line cut straight between the Laois posts.

Zane Keenan top-scored for Laois with 0-10, 0-09 from frees while Marty Kavanagh notched 0-o6 from frees for Carlow.

Laois manager Plunkett was far from happy with his team's performance commenting that they would have to improve in their final game at home against in-form Westmeath. The Laois boss remarked: "We seemed to step off the pedal having gone nine or ten points up. Carlow came thundering back into the game. Our display today would not match Westmeath."

This victory puts Laois 10-3 ahead in the SHC meetings between these counties as Laois gained the bragging rights from today's local derby. 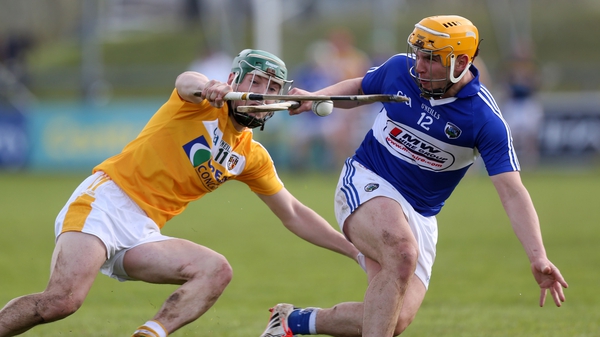