There are six senior fixtures in the football and hurling championships this weekend. We go through everything you need to know.

SATURDAY: Most areas dry, with sunny spells, but a few scattered showers will occur. Maximum temperatures 17 to 21 Celsius in a light to moderate north to northwest breeze.

SUNDAY: Mainly dry in all areas with temperatures getting above 20 degrees widely. Good news for those heading to Clones, Thurles and Carlow.

Kildare hurlers have a shot at playing in the Leinster Championship in 2015 if they can overcome Westmeath in Mullingar.

Brian Lawlor’s Lilywhites deservedly won the Christy Ring Cup last weekend in what was an absorbing clash with Kerry at Croke Park. For their efforts, you would have thought a place in next year’s Leinster round robin would have been theirs.

However, the decision-makers have decreed that Kildare must clear another hurdle if they are to line up in the race for Liam MacCarthy.

They travel to Cusack Park in Mullingar to take on a Westmeath side who finished bottom of the pile in this year’s round-robin. Why, you may ask, is the match not played at a neutral venue?

After relegation in the spring to Division 2B, Kildare’s fortunes have really turned around. Winning in Mullingar would round-off a marvellous campaign for them.

Speaking on last weekend’s Sunday Game, Ger Loughnane made reference to the growing population in County Kildare, claiming that there is real potential for the development of hurling there.

Westmeath were not disgraced in their games so far and will have had a three-week break to prepare for this do-or-die encounter. They will be looking to the likes of Niall O'Brien, Alan Devine and Philip Gilsenan to show the way to show the way against a side that they only beat by three points in this year’s league.

There is a strong sense that Wexford hurlers are about to re-establish themselves as genuine challengers for provincial honours. Last season, they could have beaten Dublin in the Leinster quarter-final and forced Clare to extra-time in the qualifiers.

After the U-21s recent victory over Kilkenny, confidence levels are high that the seniors are capable of beating the reigning Leinster champions at Wexford Park.

It's all been rather low-key from Anthony Daly's side in the build-up to to Saturday's clash. Goalkeeper Gary Maguire and forward Danny Sutcliffe are sidelined with thumb and hand injuries respectively, though Alan McCrabbe's return is a welcome boost.

The amount of time and invested in Dublin hurling has been well documented and much focus will be on Daly's troops to see whether they can push on from last year.

Wexford had a facile victory over Antrim the last day and manager Liam Dunne goes with same starting XV again. Jack Guiney, Rory Jacob, Conor  McDonald and Liam Óg McGovern form part of a decent forward line in a match where scores could be plentiful.

Dublin are a bit further down the road in their development and that could prove crucial after the dust has settled.

Waterford reeled off three late points to ensure parity at Cusack Park last weekend. It was no more than the Déise deserved as Clare were made to pay for an error-strewn second-half display. They went 23 minutes in that period without scoring.

Banner boss Colm Collins, not surprisingly, bemoaned his side's performance and his troops must now travel to Dungarvan in a bid to secure a place against Kerry in the semi-final.

In his post-match assessment, Collins pondered whether or not nerves got the batter of his side, but Clare certainly did not play like a side who were comfortably expected to see past Waterford at the first attempt.

Niall Carew will take heart at the way his side finished last Saturday, with Shane Ahearne and Paul Whyte stepping up to get the vital scores. It's vital that they make a good start on Saturday evening and so cast even more doubt in Clare's minds.

That said, you would think that the Banner have greater scope for improvement.

Many pundits remarked at the quality served up by Monaghan in their Division 2 final win over Donegal at the end of April. Okay, so it was only the league, but it's clear that Malachy O'Rourke's side are keen to continue where they left off last year and remain a creditable force in championship football.

It took Tyrone two goes to get past Down in the preliminary round. You can't say they were overly impressive in doing so and the Farney represent a more formidable unit. despite the loss of Conor McManus

Sunday's clash will evoke memories of last year's All-Ireland quarter-final and the Seán Cavanagh rugby tackle on Conor McManus and the subsequent reaction from Joe Brolly.

Could we have a similar flash-points on Sunday in what is sure to be a tight affair?

Carlow's poor league campaign does not suggest that they can cause an upset at Dr Cullen Park on Sunday afternoon. That said, what happens in spring can often bear no relation to what might transpire when the days are longer. At best, Carlow will hope to be competitive against the Royals.

When the sides met in 2012, the match finished level, but Meath have moved on a bit since then and are now eyeing a third consecutive appearance in the provincial final. However, their cause has not been helped with Conor Gillespie, Eamon Wallace and Cian O'Sullivan all sidelined with injury.

Shane O'Rourke's return to action is a boost - he is a player adept at playing midfield or leading the line.

Brendan Murphy's absence is a big loss for Carlow. All told their side for Sunday includes only two players that held the Royals in Tullamore two seasons ago.

There is no reason to suggest that Cork and Clare can't provide another hurling blockbuster. Semple Stadium is the venue and the prize for the winner is a date with Limerick in the Munster decider on 13 July. That said, the vanquished should still have a serious part to play in the race for Liam MacCarthy.

Cork got their act together when seeing off Waterford at the second attempt on Sunday last. Those couple of games should have them at the required pitch to face a Banner side, inactive since their League semi-final defeat to Tipperary on Easter Sunday.

If Clare have the same drive that saw them move up an extra gear in last season's All-Ireland series, then they will be hard to dislodge and you would have to fancy them for provincial honours. They haven't won a title since 1998. Cork's wait goes back to 2006.

Both forward divisions are capable of clocking up high scores, though Clare look that bit more assured in defence and that could ultimately prove the difference. 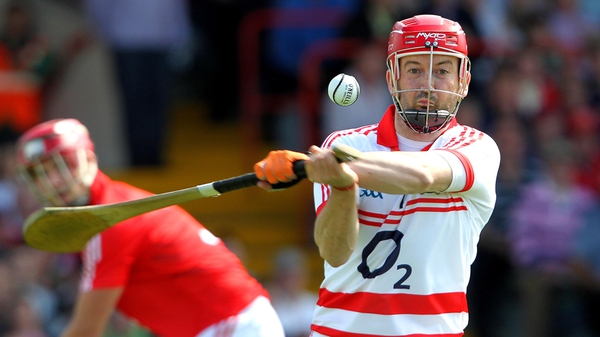