Last season’s Allianz FL Division 2 champions Derry maintained their unbeaten start to life in Division 1 after a brace of early goals provided the platform for a 3-16 to 0-12 win over Westmeath at Celtic Park.

With their Ballinderry Shamrocks contingent still to return to the squad, the hosts gave youth their chance but some of the experienced heads also came to the fore with Sean Leo McGoldrick and captain Mark Lynch both giving powerful displays throughout.

Westmeath opened the scoring thanks to a John Heslin point after 70 seconds, however, Heslin's score was the only time the visitors were ahead on the scoreboard as Derry offered the perfect response to notch up scores on the board.

The Lake County defence was left hugely exposed on countless occasions during the opening half and Derry responded to Heslin's early effort with two quick-fire goals.

Both arrived in the fourth minute, with Ciaran McFaul firstly setting up Cailean O'Boyle who slotted past Gallagher, while from the resulting kick-out, Derry again took control when with Westmeath corner-back Steven Gilmore left exposed Benny Heron fired into the net to for a 2-00 to 0-01 lead after just four minutes.

Quick scores from Under 21 player Kevin Johnston and Lynch ensured a seven-point lead in the eighth minute and although Westmeath responded with points from Heslin, and a well-worked Kieran Martin score, there was no doubting Derry's dominance.

Brian McIvor's charges soon moved 2-06 to 0-03 ahead with James Kielt and Emmett McGuckin adding to their tally.

Heslin and Lynch traded points and while Westmeath claimed the final two scores of the half to ensure a 2-07 to 0-06 interval scoreline, Derry missed a number of further scoring chances in the second quarter.

An Enda Lynn fisted effort in the 26th minute came off the posts, while a Lynch goal-chance scraped wide of the posts with Johnston also having a green-flag effort blocked by Westmeath ’keeper Stephen Gallagher just before the break.

Westmeath manager Paul Bealin made a number of positional changes on the restart, with James Dolan moving to the full-forward line, Paul Sharry switching to wing-back and Heslin coming to midfield, with Ray Connellan operating on the half-forward line.

Dolan's move did not reap the rewards expected and Sharry and Connellan were both called ashore inside 12 minutes of the restart.

Derry had moved 3-11 to 0-09 ahead at this stage, after McGuckin netted their third goal after some excellent work in the build-up by McGoldrick.

The luckless visitors saw Dessie Dolan's 50th minute goal effort come off the posts while David Duffy and Heslin both shot wide in the closing quarter, before Derry sealed victory with a deserved point for McGoldrick late on. 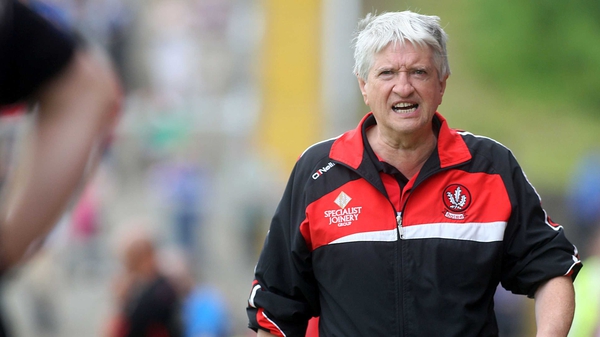