Alan Freeman was the star of the show as Mayo claimed a crucial Allianz Football League Division 1 win at McHale Park on a scoreline of 2-15 to 1-13.

Full forward Freeman scored 1-05 with three of the points arriving during an important stage of the second half.

Goals from Freeman and Jason Doherty had Mayo 2-07 to 0-11 ahead at the end of an absorbing opening period.

Despite playing some fine football Kerry were extremely unfortunate to be trailing at the break as they responded well to the concession of an early goal.

But Kerry were moving the ball quickly to an inside forward line that were causing plenty of problems for the locals.

At the opposite end Freeman and Michael Conroy did nail scores as the teams were deadlocked at 1-03 to 0-06 by the 18th minute.

Kerry then enjoyed a productive spell as Conor Cox's accuracy was another encouraging feature for the visitors'.

Three Cox points had Kerry leading by two before Mayo summoned a burst in first half injury time to stun Eamonn Fitzmaurice's side.

Adam Gallagher slotted a routine free and then Doherty drilled an opportunistic goal to nudge Mayo back in front.

After the restart it was similarly eventful as Kerry came thundering back into the reckoning with Cox landing a point before a 39th minute goal.

O'Brien, who was making a significant impression, slotted a delightful shot into the top corner and suddenly Kerry were 1-12 to 2-07 in the ascendancy.

A Kevin McLoughlin free and a smashing effort from Jason Doherty had the teams level again by the 43rd minute.

Then O'Brien pointed for the Kingdom, but Mayo, roared on by a typically passionate home crowd, struck six in a row from Freeman (4), McLoughlin, and Enda Varley.

Kerry lost for the third League match on the spin as Mayo concluded the contest with a flourish to open their account. 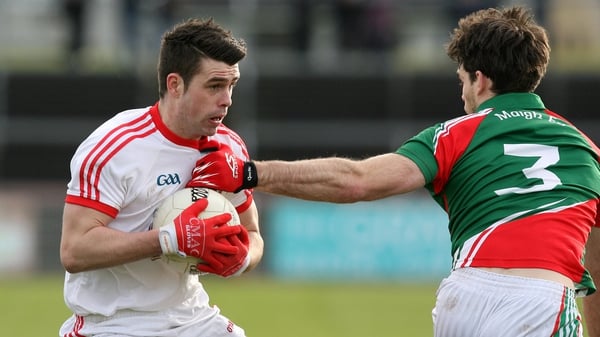