Tommy Walsh’s AFL future is once more in doubt after the former Kerry star was again added to the Sydney Swans’ long-term injury list.

Walsh has failed to recover from an horrific injury he sustained playing against Essendon in June of last year. The 2008 Young Footballer of the Year needed surgery to reattach his three hamstring muscles which were torn from the bone as he stretched to collect a pass.

He had hoped to play in some of the pre-season matches but has not managed to prove his fitness, and was added to the club’s long-term Injury list on Tuesday.

Under AFL rules a player placed on the list is ineligible to play in competitive games for a minimum period of eight weeks.

This means Walsh will not be available for selection until mid-April, at the earliest, and will be absent for at least the first four matches of the new AFL season.

He may subsequently find it difficult to break into the Swans’ starting side, with superstars like Lance Franklin blocking his path.

Walsh has made just five appearances for the Swans since transferring from St Kilda in 2011, and his current contract expires at the end of this year.

The 25-year-old told Newstalk in December that he would decide in the middle of 2014 whether his future lay in Australia or Ireland, but with another lengthy injury absence now in the offing, doubts over his AFL future must surely arise. 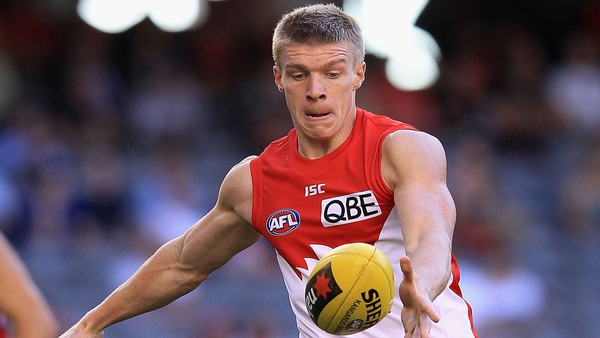 Kerryman to line out for Sydney against Melbourne