Former Kerry footballer Tommy Walsh looks set to miss out on the biggest day in Aussie Rules as his Sydney Swans face Hawthorn in the AFL Grand Final on Saturday.

Walsh, who transferred to Sydney from St Kilda at the start of the season, has been named as one of three players on the Swans’ emergency list for the game.

He will only get a chance to play if players named in the Swans’ 22-man squad cry off injured before the start of the game, or if the Sydney coach John Longmire makes a late tactical change.

"At the moment the team is as named. I don't expect any changes between now and game day," Longmire told reporters at Friday's grand final press conference.

Walsh made an impressive AFL debut earlier this season against Melbourne, but fell out of favour after a poor performance against St Kilda the following week.

He forced himself back into contention for a spot in the match day squad for the AFL Finals series with a number of fine performances in the reserve team.

"At the moment the team is as named. I don't expect any changes between now and game day" - John Longmire

Hawthorn finished top of the AFL table during the regular season, with Sydney in third just one win behind.

Sydney stunned the Hawks when they met during the regular season, coming from 25 points behind in the first quarter to win by 37 points, and kicking 11 goals to Hawthorn’s two in the second half.

Saturday’s Grand Final is likely to be a much tighter affair however, with discussion focusing mainly on how the teams will cope with the poor weather that is expected in Melbourne over the weekend.

Hawthorn, who last won the title in 2008, have been favourites to lift the cup for most of the season, but question marks have been raised after an unconvincing preliminary final (semi-final) win over the Adelaide Crows.

Sydney, with the tightest defence in the competition this season, defeated Collingwood in their preliminary final, and will be looking for an improved forward performance in their efforts to win the premiership title for the first time since 2005 with a team that included another Kerry All-Ireland winner Tadhg Kennelly.

The Grand Final takes place at the MCG in Melbourne on Saturday with an Irish start time of 5.30am Irish time. 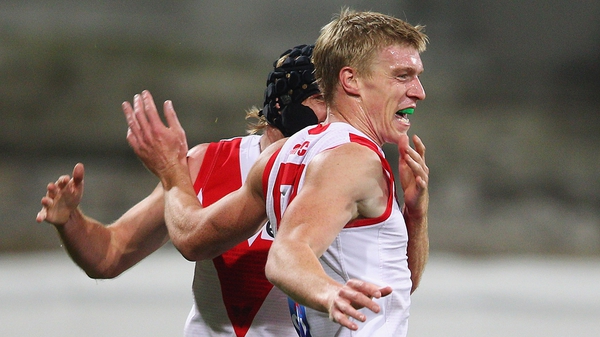