Glorious redemption for Kilmacud Crokes but boy they must have felt a terrible sense of deja vu as the seconds ticked down in this riveting AIB All-Ireland club football final contest.

Beaten in last year's decider by a late, late Kilcoo goal scored by Jerome Johnston, the Dubliners remarkably found themselves in almost the exact same position - two points ahead and defending another last-ditch goal attempt.

Derry and Ulster champions Glen went short with a '45 at the Hill 16 End, Conleth McGuckian turned and shot and sneaked his effort beyond everyone but it went just the wrong side of the upright as Crokes escaped to victory.

A landmark victory which they will savour considering the journey they have travelled.

Replays showed that Glen's Ryan Dougan was so close to getting a touch onto the McGuckian shot which would surely have directed the ball goalwards.

There was personal redemption too for Crokes goalkeeper Conor Ferris who gave the ball away last year in the build-up to the Johnston goal as he pulled off a terrific save from Glen's Conor Glass, resulting in that '45' being awarded.

In actual scoring terms, Galway All-Star Shane Walsh led the way with 1-03, all from placed balls, while four late Crokes points in a row helped them to turn the screw on an utterly determined Glen.

It wasn't a game to remember for him as he kicked a series of wides and, perhaps worryingly for Dublin, appeared to jar his ankle late on and was left clutching it before being taken off.

Still, Crokes got the job done and their third All-Ireland success will surely go down as their most memorable given that painful Kilcoo setback last February.

Crokes were installed as favourites beforehand and edged the first-half 1-04 to 1-03 though that scoreline failed to tell the story of a slightly schizophrenic half hour for the Glenalbyn men.

For the first 15 minutes they were in real trouble and trailed 0-01 to 1-03 at that stage after a frantic Glen start.

There were only 34 seconds on the clock when Danny Tallon, after being fed by Jack Doherty, dummied Crokes corner-back Micheal Mullin and then held off Cillian O'Shea before blasting a shot to the roof of the net for Glen.

Alex Doherty was proving a real handful too and after being fed by Eunan Mulholland sniped a terrific Glen point before going close with another effort.

The Crokes defence looked surprisingly brittle having not previously conceded a goal since the Dublin semi-final defeat of Thomas Davis.

A 16th minute Crokes goal was badly needed from their perspective and hauled them right back into the game.

Captain Shane Cunningham won it after being played in by Dara Mullin before drawing the hand over the shoulder foul from Glen defender Dougan.

Walsh duly converted for the three-pointer and intercepted the resulting kick-out as the south-Dubliners came roaring into the contest.

Mullin, Cunningham and O'Brien added scores to give them that narrow half-time lead but, in truth, they should have led by more.

Mannion's first three attempts at goal, two from open play and one from a free, all came to nought while Walsh dropped a point attempt short from a free and both Dias and O'Shea ballooned a couple of efforts up in the air.

The errant finishing jarred with the patience they showed at other times when playing in Cunningham and O'Brien for their scores.

Mannion had Dougan for company all afternoon while Walsh was tracked by Michael Warnock who, on a rare foray towards the other end of the pitch, ran head first into Crokes full-back Theo Clancy and required treatment for the bang.

All told, Crokes looked to be in a strong position to kick on for the win if they hold their patience when presented with Glen's blanket defence and, of course, if they could down on the poor shooting.

Two minutes after the restart, they almost struck a second goal, a clever move involving Hugh Kenny, Walsh, Andrew McGowan and Aidan Jones ending in a blocked shot and a '45 which Walsh converted.

A back-and-forth encounter suddenly swung Glen's direction with four points in a row from the Ulster champions between the 36th and 41st minutes.

Tallon, Alex Doherty and Jack Doherty did the damage and now they were in the driving seat with a 1-07 to 1-05 advantage approaching the final quarter.

They retained a two-point lead approaching the hour mark, 1-09 to 1-07, but, agonisingly, didn't score again as Crokes brought all their big game experience to bear on the contest to overcome the first time finalists.

Dara Mullin, placed ball expert Walsh and substitute Cian O'Connor were all on hand to supply the late scores for Robbie Brennan's side. 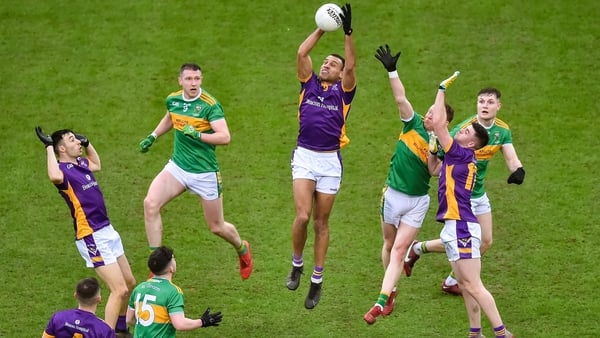