Jacqui Hurley has been named as the new presenter of The Sunday Game highlights show, as RTÉ Sport today unveiled its GAA punditry line-up for 2023.

Hurley will replace Des Cahill in the chair, with Damian Lawlor hosting the new weekend offering, bringing all of the action and analysis from The Saturday Game to viewers at home on RTÉ2 and RTÉ Player.

Joanne Cantwell will continue to present The Saturday Game Live and The Sunday Game Live.

The new pundits will be joining a line-up of ongoing panellists for RTÉ's unparalleled offerings of highlights, analysis, and debate for the duration of the GAA Championship season. 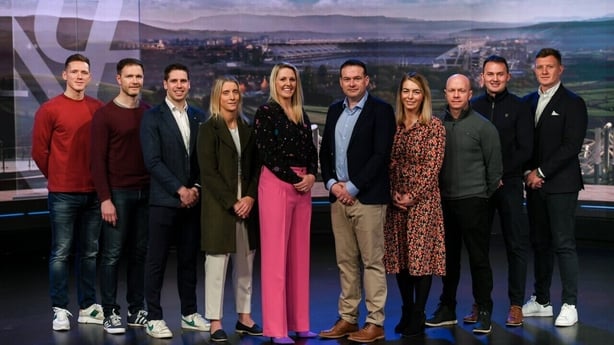 RTÉ has expanded its media rights providing comprehensive GAA Championship coverage across RTÉ television, radio, and online services for the next five seasons, guaranteeing quality free-to-air coverage to audiences in Ireland across 12 months of the year from 2023 to 2027 inclusive.

RTÉ will continue to show 31 championship games across the island of Ireland on RTÉ television and RTÉ Player, as well as the Joe McDonagh Cup final, and both Tailteann Cup semi-finals and final for the next five years. RTÉ's ongoing commitment to camogie will see at least nine live matches per year televised. Increased free-to-air Allianz National League games, which commences next Saturday, 28th January, as well as continued coverage of the AIB Club Championships will feature on Saturday nights, ensuring year-round live GAA coverage across all platforms on RTÉ.

The Sunday Game presenter, Jacqui Hurley said: "Working on The Sunday Game was a childhood dream of mine. It's an absolute privilege to take on such an iconic role and follow in the footsteps of some incredible broadcasters. I look forward to the challenge and can’t wait to get started."

The Saturday Game presenter, Damian Lawlor said: "The new GAA fixture calendar has meant more inter-county games than ever within a condensed period. This has given RTÉ Sport an opportunity to introduce The Saturday Game. Along with our production team, I will do everything I can to ensure the programme develops into an unmissable, flagship show that delivers the best insight and analysis for our viewers."

Declan McBennett, RTÉ Group Head of Sport, said: "This season marks a reigniting of The Sunday Game with fresh off the pitch panellists alongside seasoned experts, in moves that are consistent with the evolution of The Sunday Game throughout the years.

"New presenters Jacqui, Damian and the new panellists are hugely experienced and perfectly placed to bring all of the excitement and analysis of the GAA Championship to our audience later this year."

On air since 1979, The Sunday Game is shown every Sunday night during Championship season on RTÉ2.