By Ger McCarthy at Croke Park

Dublin will face either Kerry or Mayo in this year's All-Ireland SFC semi-finals following a 10-point win over Cork at Croke Park on Saturday evening.

A terrific second-half performance in which Dublin outscored their opponents 0-11 to 0-03 meant that Dessie Farrell’s side ran out convincing winners. Cork could have little complaint with the outcome despite a gutsy showing.

Dean Rock starred for the winners who look in good shape ahead of their upcoming All-Ireland last-four encounter.

A lively opening period, despite some poor wides, saw Dublin build a 0-06 to 0-04 lead after 20 minutes.

Cork were well in the game thanks to their full-forward line. Cathail O’Mahony, Steven Sherlock and a brace of Brian Hurley efforts represented the Rebels’ early scorers.

Bugler was yellow carded for a high challenge as Dessie Farrell’s side began to dominate the middle third. A pair of Rock frees extended the home side’s advantage to four points after 25 minutes.

The closing stages of an entertaining half saw Cork keep pace with their opponents thanks to a Sherlock free and mark plus a superb Eoghan McSweeney effort.

It was 0-10 to 0-07 at the break following Tom Lahiff and Ciaran Kilkenny points. Jonny Cooper picked up Dublin’s second yellow card on the stroke of half-time.

The second period belonged to Dublin who prevented Cork from scoring until the 55th minute. By then Dean Rock’s accuracy from frees coupled with additional Brian Fenton, Lee Gannon, Aaron Byrne and Ciaran Kilkenny efforts saw the Dubs easily see out the remaining quarter.

There are tougher tests ahead but Dublin passed their latest examination with flying colours. 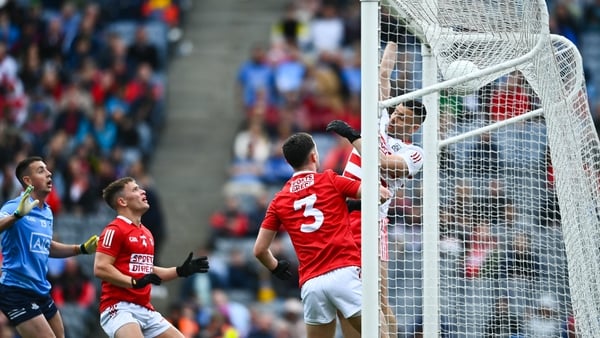