Rian O'Neill insists Armagh will not be getting ahead of themselves despite comfortably seeing off Donegal in the battle to reach the All-Ireland quarter-final.

The Orchard County will be in Monday's draw for the last-eight after a 3-17 to 0-16 win in their qualifier clash in Clones.

O'Neill made a telling contribution, scoring one of their three goals from a penalty just before half-time.

"We're not getting ahead of ourselves. We let ourselves down (before) and that's the first time in about eight years we've put two big championship games back-to-back together and we're just looking forward to the next game whoever that may be," he told RTÉ Sport at full-time after being awarded Man of the Match.

But the forward felt the performance against Donegal showed the potential of Kieran McGeeney's side when they play to their level.

"A few weeks ago, we looked at ourselves and saw that our intensity wasn't there. Today I think everybody could see the intensity was there from the word go," said O'Neill.

"We're a different team when we play like that and if you bring the intensity, you'll not be too far away."

The intensity was aided by a lightning start which saw O'Neill's team-mate Rory Grugan score the opening goal after barely 10 seconds of play.

"From a throw up, it's an opportunity to get ball in when there aren't defenders placed," said Grugan, who also echoed O'Neill's view that Armagh had not previously been able to string big wins together back-to-back.

"It's like 15 vs 15. So it wasn't exactly a set-piece thing. We just said to get the ball in and it broke well for us and we were able to put it away.

"When you get a score, you're happy and the goal is an extra bonus so it was a good start but we didn't push on from there.

"Donegal kicked five or six in a row from there but we responded well."

The stands in Clones were dominated by the contingent of Armagh supporters and O'Neill paid tribute to his county's fans.

"Armagh fans outnumbered Donegal fans three to one and we're going to turn Croke Park orange in a few weeks."

Grugan added: "Armagh have been crying out for that. (The fans) have stuck with us through thick and thin and the thing has really kind of built. Rather it was post-Covid times where people just have a hunger for the football again and coming out for these big days." 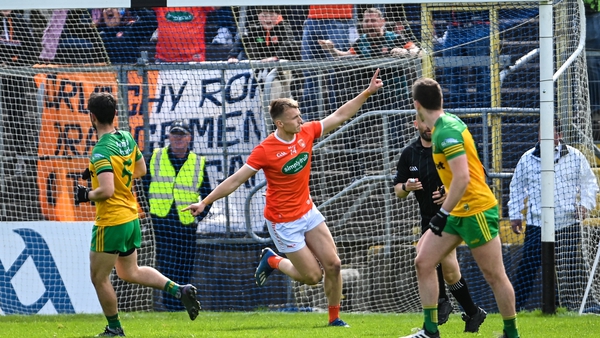