Pat Spillane says that Mayo remain badly short of scoring power in the forwards even after getting back to winning ways last weekend.

Six weeks after their one-point loss to Galway in the Connacht championship opener, Mayo returned to action in an awkward Round 1 qualifier clash against Monaghan in Castlebar.

After a sluggish start, Mayo rustled up 1-03 in the wake of Conor McManus' black card, establishing a lead which they never relinquished, eventually winning a scrappy encounter by four points.

While they have a history of gathering momentum in the qualifiers, notably in both 2016 and 2017, Spillane didn't see evidence that an All-Ireland title is in the 2022 crop.

"I wasn't that impressed by Mayo," Spillane told the RTÉ GAA podcast. "Yes, they won and they deservedly won. Is there real lasting in this Mayo team? I don't think so.

"I look at the forwards and I look at their scoring return. I don't see it. The starting six got two points last week. An awful lot was made (on Sky Sports) of their shooting efficiency in their first half.

"It was 10 shots, eight scores. You say, 'yeah that's very good' but then I realised out of those eight scores, there was only three from play. And how much did the forwards score? They got one point from play in the first half. Ten shots at goal from a team that was dominating isn't great."

In mitigation, Mayo were without All-Star attacker Ryan O'Donoghue, with Tommy Conroy already ruled out for the season. Cillian O'Connor, meanwhile, is still feeling his way back to form after missing the entirety of the 2021 campaign. 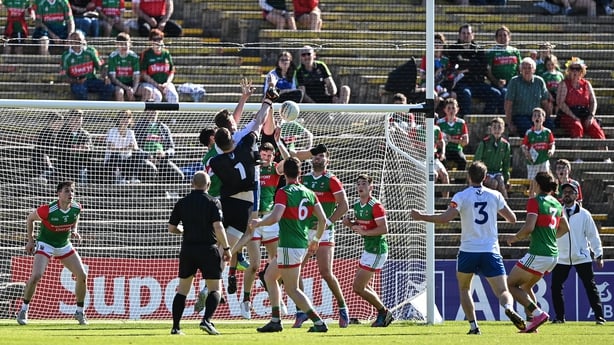 On Saturday, they face Kildare in a repeat of the famous Newbridge or Nowhere game in 2018 - albeit in a different venue this time. The Lilywhites may still be shell-shocked following their hammering in the Leinster final and Spillane senses that Mayo, despite recent hiccups, should have enough to progress to the last-eight.

"Ryan O'Donoghue is still doubtful, he's a big loss. The O'Connors were poor last week. I liked Aidan O'Shea around the middle of the field, he had good energy. (Matthew) Ruane was good.

"The Mayo team that were beaten by Kildare in Newbridge a few years ago was on its last legs. There's probably a kick in them still - enough to beat Kildare.

"But I wasn't impressed by Mayo. They were against a very average Monaghan team that were there for the taking and they huffed and they puffed and they and they just managed to get over the line."

Immediately after the game, Monaghan boss Seamus McEneaney laid into referee Barry Cassidy for denying his side a couple of penalty claims, in particular when Lee Keegan wrapped his arms around substitute Conor Leonard in the closing stages.

While Spillane is inclined to agree with 'Banty' on that call, he ultimately still regards the focus on decisions as a deflection from Monaghan's poor display.

"On the refereeing decisions, I would agree with Banty. Conor McManus' black card was harsh and I certainly thought Monaghan deserved a penalty.

"Banty played a blinder in the press conference because he managed to deflect attention from what was, yet again, a very underwhelming and poor Monaghan performance.

"I've been saying for years that Monaghan are a tired team. Same old, same old. One dimensional play, depending on the same old players. Heading to the well once too often and they found that well was dry."