But Gallagher's side came through the additional 20 minutes to secure the two-point victory and lift the Anglo Celt Cup for the first time in 24 years.

Derry reached the final of this year’s provincial competition after dispatching All-Ireland champions Tyrone and Monaghan en route to the decider.

And they took the game to Donegal in the early stages of the Clones contest, rewarded with an early goal from a well-worked move, which led to Niall Loughlin scoring from close range.

Gallagher’s side took a three-point lead into the break but had to deal with a barrage from their opponents in the early stages of the second half, which levelled matters on the scoreboard.

The sides could not be separated after the 70 minutes plus additional time and while the opening half of extra time maintained a close contest, Derry eventually pulled away with two late points to seal the victory.

"I’m just delighted," said Gallagher, speaking to RTÉ Sport after the game. "It was an amazingly tense game and an amazingly exciting game with lots of quality.

"It was just an unbelievable achievement for our boys to show that strength of character." 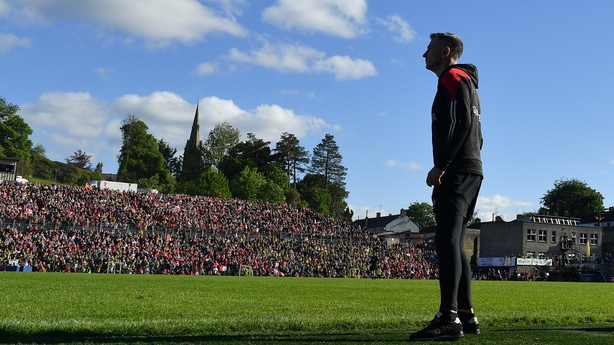 Chrissy McKaigue had the honour of accepting the trophy at the end of the game, and Gallagher singled out his captain as bringing a huge amount to both sides of the game, the playing and the management.

"He’s not just a captain, but an extended part of the management team and someone that I am very privileged to have the opportunity to get to know," said Gallagher.

"They played their hearts out and I’m delighted for them."

Donegal manager Declan Bonner said that he fully expected the game with Derry would be a battle to the death and has now challenged his side to forget the defeat and maintain a push towards All-Ireland success.

"We knew it was going to be a war of attrition and that’s exactly what it turned out to be," said Bonner. "It went down to the wire and ultimately Derry got the scores when it mattered most.

"It was the same last year, it also went down to the wire. Paddy McBrearty’s point got us over the line.

"There was nothing between both teams and it was played in a good sporting manner. Ultimately, we came up short.

"The losing dressing room is a disappointing place to be in a provincial final," he added.

"We have got to dust ourselves down, we’ve another campaign ahead of us hopefully."