It was a sorry spring for Dublin, resulting in Allianz League relegation, but it's quickly becoming a summer of fun for the Sky Blues who cruised to their 61st Leinster title success at Croke Park.

After demolishing both Wexford and Meath, Dessie Farrell's All-Ireland hopefuls saved their very best in the province for final day with five goals between the fifth and 27th minutes ending the contest by half-time and securing a remarkable Leinster 12-in-a-row.

Two goals from Cormac Costello and further majors from Ciaran Kilkenny, Man of the Match Con O'Callaghan and defender John Small did for Kildare who must somehow now pick things up for a Round 2 qualifier on June 11/12.

As for Dublin, they'll surely face more difficult tests in their bid to regain the Sam Maguire Cup but they enter the All-Ireland series and a quarter-final contest on June 25/26 in rude health after breezing through Leinster with 50 points to spare overall.

All their big guns are firing and the sight of Brian Fenton lording it again at midfield and contributing three points will reassure manager Dessie Farrell. O'Callaghan looks a rejuvenated player too after missing all of the league with ankle trouble, helping himself to 1-05 this time.

Kildare actually kicked the first point of the game and so enthused was Paul Cribbin with his third minute score that he punched the air in delight, perhaps in anticipation of further gains.

But after that initial burst of excitement, there was precious little for Cribbin or Kildare to get excited about as they quickly became a speck in Dublin's rear view mirror.

Remarkably, by the 27th minute, Dublin had five goals clocked up, once again reducing a major Championship game to a question of how much will they win by?

Two seasons ago, Dublin massacred Meath by 3-21 to 0-9 and this was another dose of capital punishment dished out to an overwhelmed provincial finalist.

Westmeath, Laois and Meath have all suffered the same sort of Leinster final defeats over the last decade with Dublin quickly finding their stride and delivering another awesome display.

Kildare captain Mick O'Grady picked up O'Callaghan but was under pressure straight away, conceding a free for the first point that Dublin scored. O'Callaghan then slipped away from O'Grady to play in Kilkenny for Dublin's first goal in the fifth minute.

Two minutes later, a Dean Rock point attempt hit the post and fell nicely for Costello to gather possession and slam to the net.

Costello was at it again in the 16th minute, this time accepting a pass from Sean Bugler and selling a couple of defenders a sumptuous dummy before rifling the ball beyond Mark Donnellan.

Bugler was a constant concern for Kildare's shellshocked defence and he fed Small for Dublin's fourth goal in the 20th minute, the defender doing a pretty good impression of his younger brother, ace attacker Paddy.

Kildare had looked porous against Westmeath in the provincial semi-finals, leaking 2-15 that day, and Dublin clearly felt they were there for the taking because they went for the jugular all evening.

O'Callaghan grabbed the team's fifth goal in the 27th minute. It was another free flowing move that had Kildare at sixes and sevens as Eoin Murchan kick-passed in to Costello who spun his man and played in the Cuala colossus.

Former U-20 star Lee Gannon, a relative greenhorn in Dublin's defence, even took the opportunity to burst forward for a couple of first-half scores, helping Dublin to hit the interval with a giant 5-07 to 0-06 lead.

There were no more goals - for Dublin at least - but plenty of points. O'Callaghan's excellence continued and the Cuala man added five more singles in the second-half while Dublin finished with nine different scorers in total.

Kildare were better after the break though some of the energy had dissipated from Dublin's game as they ran in their full allocation of subs.

Jimmy Hyland pulled back a consolation goal for Kildare in the 50th minute which was as well worked as any of the five that Dublin scored. Kevin Flynn played the ball across to Hyland after a multi-man, weaving move down the right and the 2018 All-Ireland U-20 medallist palmed the ball home from close range. 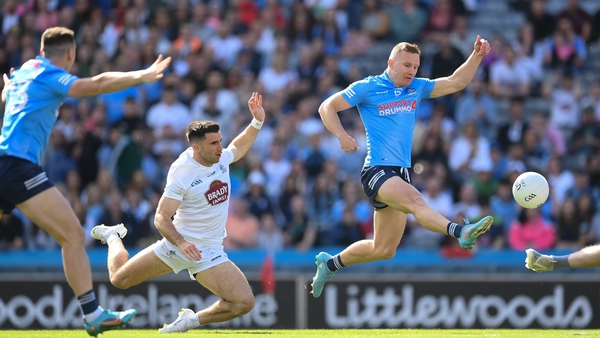