Kilcoo's Eugene Branagan has no plans to commit to the Down senior football team as he aired frustrations about the absence of a "winning mentality" within the group..

Branagan was crowned AIB Club Footballer of the Year on Tuesday. He was named the man of the match in the club’s All-Ireland final win over Kilmacud Crokes, displaying incredible athleticism and skill throughout the club’s outstanding run in their victorious 2021/22 club campaigns.

The All-Ireland champions were strongly represented in the football team with Kilcoo claiming seven slots.

But there appears to be no sign of a mass Kilcoo infusion into the county set-up anytime soon - certainly where Eugene Branagan is concerned.

Branagan is asked why so few Kilcoo players have opted to play with the county senior side who fell away badly to Monaghan at the weekend and who now face life in the Tailteann Cup.

"I’ve no ambition to play for the county. I was brought up with the club. If the county had a winning mentality, maybe you would think about joining but at the moment I can’t see that and I haven’t seen it in the past few years and I would say it is a thing for most Kilkcoo players."

Could that change in the future?

"There would just have to have a manager there with a winning mentality, I think."

But James McCartan has a winning mentality - both as a player and manager?

"Yeah, but there is a core group of players there. They have never won anything, and I don’t think they know what is needed to win. That would need to change," he elaborated.

"Everyone is on top of us but that fuels us to keep us going."

Branagan was asked if that viewpoint caused frustration or upset with other clubs and players around the county.

"Everyone in Down is on top of Kilcoo anyway, whether we are down and out or winning All-Irelands. Everyone is on top of us but that fuels us to keep us going."

The talented Kilcoo star says the pause in play during the pandemic and the appointment of Mickey Moran helped the club reach the Promised Land.

"We were beaten in the All-Ireland final a couple of years back by Corofin but after that, with play stopped due to Covid, we all were at home. We all had a chance to work hard and there was nothing else to do but train and prepare for football.

"And then Mickey’s appointment was huge. For me personally he helped me with my discipline. Before he came on board, I was sent off a few times.

"In our second or third league game I was sent off in front of him and he spoke to me afterwards. I was embarrassed, I felt I let him down and my club down. He had a chat with me and thank God I haven’t been sent off since.

"We played what was in front of us. The Down championship was open, Ulster was very tactical, the All-Ireland semi-final was open near the end and tactics went out the window in the final. But we got there. It’s nice to get this award but it was a real team effort, and everyone knows that." 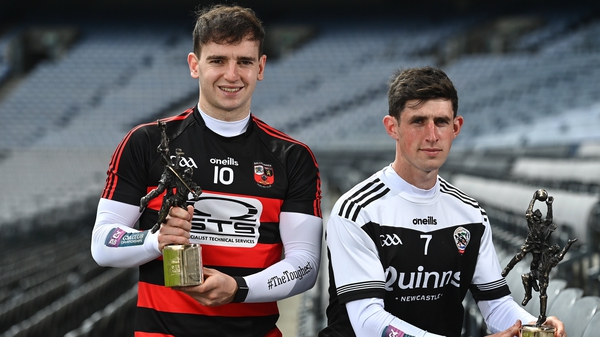 Ballygunner and Kilcoo dominate Team of the Year picks