Things are really heating up in the Allianz Leagues and this weekend's results will give a strong indication as to who will make the top two places for league finals and bottom two for relegation.

Getting to a final gives momentum and helps team focus.

In-house games and challenge matches are beneficial to a point, but you can’t beat competitive games to prepare for championship. Relegation is not the type of preparation that is conducive to a successful summer run, and it can sow a seed of doubt in the minds of players and supporters alike.

There are intriguing games in all divisions, but the stand-out fixture is Saturday night’s game in Tralee between Kerry and Mayo.

Both teams come into this game in great form, level at the Division 1 summit on seven points.

Last time out Mayo had a hard fought win versus in-form Armagh. James Horan's side scored 0-15 against a team that have been exciting in attack and frugal in defence so far this year, yet Mayo finished strong with the last five points of the game.

Kerry, to their credit, after a slow start with a draw against Kildare, have been improving throughout the league.

In their last game away to Monaghan, they were outstanding in attack, scoring 3-14 and bar the last few minutes, very effective in defence.

Kerry and Mayo boast the best defensive records in the division, conceding only 11.5 and 12 points per game, respectively. Both are scoring well, with Kerry's 17-points average per game two better than tonight's opponents.

Both Kerry and Mayo have been consistent performers towards the business end of the seasons, contenders if not champions. In each of the last three seasons Mayo have reached at least semi-final stages of the championship, Kerry with a final and semi-final appearance in the same time period.

There has been little to choose between the sides in league clashes, while championship battles have been fewer on the ground, the last meeting a Super 8s tie three years ago where the Kingdom emerged victorious 1-22 to 0-15.

Both teams consistently score goals in games regardless of the competition or opposition.

A combination of fast counter-attacks, diagonal kick-passes into forwards and explosive support runs from deep, make both teams a constant threat. A three-point lead against either of these teams is quickly nullified with a goal.

For us neutrals, direct, hard running taking on defences makes games involving either of these teams very exciting.

When watching Mayo and Kerry there is much to admire in how they are able to adapt and mix their tactics depending on what they face.

Short or long kickouts, run it or kick direct, play with a very deep lying half-forward line or huge width, play with a high pressing game or drop off into a zonal defence, both teams adapt as needed.

A constant is that they both have excellent ability to execute the skills of the game. The best teams also tend to be ruthless, cynical, calculated as needed. These two are no different.

Perhaps the most telling factor on Saturday will be how clinical both teams will be in front of goal. Hopefully weather conditions won’t hinder the brilliant kicking skills of the likes of Ryan O’Donoghue, Diarmuid O’Connor, David Clifford and Sean O’Shea.

It is impressive how Mayo and Kerry have been innovative in their tactical set-ups.

Mayo have played a 'Total Football’ style, with their forwards being outstanding tacklers and their defenders contributing well in attack.

Regardless of position, all their players are making telling contributions with or without the ball.

Lee Keegan is a typical example. Look at how often has he won a free inside the opposition 45m line after taking a pass off the shoulder. At the same time look at the desire to tackle from Ryan O’Donoghue.

This system of play requires very high fitness levels and even higher levels of understanding with team-mates. It takes serious time on the training pitch to improve the decision making needed to know when and where to support and time runs, or when to track men, cover space, or double up on players.

Kerry are so often referred to as traditionalists, but been innovative in kick-out defence often pressing up to eight players inside the opposition 45m line to present short kick-outs.

This brave approach puts serious pressure on keepers to kick long which allows Kerry players to dominate the skies with their outstanding fielding skills.

Both teams have really strong squads at present. Kerry have a settled panel, tinkering with their team in each league game, but their changes have generally involved bringing in players that we are already familiar with.

The reintroduction of Jack Barry and Diarmuid O’Connor at midfield following club duty with Na Gaeil was a huge boost.

The absence of Cillian O’Connor and Tommy Conroy would affect any team, but the contribution of these new players and the retention of Oisin Mullin have helped to offset their respective losses.

We can expect to be served up a real thriller of a game on Saturday night.

I look forward to seeing two form teams take each other on and I wouldn't be surprised if the experienced O’Connor or Horan pull a rabbit from their hat and change the pattern of the game. 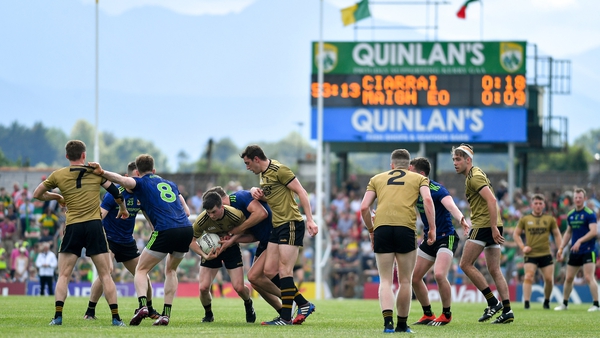