Perhaps Meath manager Andy McEntee would describe his half a dozen years in charge as something of a rollercoaster ride.

Three years ago he guided the Royals to promotion from Division 2 and to the Super 8s, resulting in a fresh three-year deal. To date, that has been the high water mark, and the last four months alone have been a challenge.

That he is still in the role is something of a surprise to many given Meath's executive committee to remove McEntee as manager. A county board meeting held in October saw McEntee, who stated ahead of the meeting he wished to stay on for a sixth season, remain in place by way of a 46-27 vote.

County chairman John Kavanagh called for a "united county" to move forward following the vote, but it was hardly a ringing endorsement either.

The sobering defeat to Galway last Sunday – where only the half-time scoreboard was more atrocious than the conditions from a Meath perspective – the latest dent to fragile confidence.

"Abject" was Oisín McConville’s candid description of the Meath performance and the 'highlights' reel wasn't forgiving.

It took 46 minutes of play for Joey Wallace to open the scoring for the visitors in Salthill, the ironic jeers of the drenched supporters a moment to forget.

"I'd swap hatred for sympathy any time," says O'Rourke, who from his own playing days, was only ever familiar with the former.

Of their dozen wides, some were executed with little conviction. After the break, with the wind, they outscored the Tribesmen by just a point.

McEntee might suggest – he refused to speak to the media post-match - that taking the glass half-full approach, it’s far from doom and gloom.

Firstly, it was the second last day in January. A couple of positive results between now and the end of the league and this game could have little relevance.

Looking closer at the proceedings at Pearse Stadium, having dominated possession and availing of the wind advantage, by the 23rd minute, Galway had only registered three points of their own. It wasn’t pretty, but it was dogged and effective.

Tomo Culhane’s goal five minutes later ended the game as a contest, but the early body of work cannot be entirely be dismissed either.

Notwithstanding, Tribes boss Padraic Joyce’s assessment that "it was nip and tuck in the first-half there for a while" was generous in the extreme.

Two years ago, they went into the half-time break against Mayo in the league having registered a single point. A year previous, they notched four points in a Leinster final.

They are certainly outside the top eight sides, but a good run puts them in and around the struggling big boys.

Speaking on the RTÉ GAA podcast earlier this week, Colm O’Rourke pointed out that given his county have failed to beat any side ranked above them in seven or eight years, Division Two is their "natural territory".

The two-time All-Ireland winner remains heavily involved in the club scene in Meath – O’Rourke will take charge of the Simonstown senior footballers again for 2022 – and can’t offer any solution to a team who appear to have stagnated.

"If somebody said to me, can you name three players to put on the Meath team for next Sunday that would make an appreciable difference, I would have to say I wouldn’t be able to," he said.

"And I know most of the players in the county. There is no obvious quick fix."

On a more immediate level, three of their next four games are at Pairc Tailteann, starting this afternoon with the visit of Roscommon.

Even if the Connacht side kick on from the win over Cork and take the points on Sunday, a performance would be something to hang the Meath hat on. Home victories over Down and the Rebels, also first round losers, isn’t a far-fetched possibility should the Royals get their house somewhat back in order.

Whatever materialises, at the very least, O’Rourke expects something of a jolt today from his fellow county men.

"Any self-respecting player or team will put in a massive effort after a big disappointment like Galway.

Follow all the football and hurling action with our live blogs on RTÉ Sport Online and the RTÉ News app, and watch highlights on Allianz League Sunday on RTÉ2 at 9.30pm 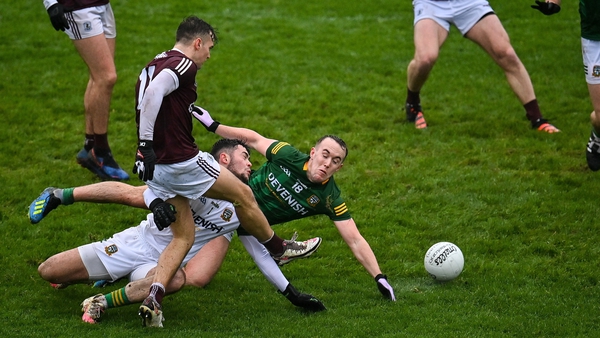