The Ulster Football Championship's reputation for cliff-hanger ties and shock results is wearing thin, its proud boast as the most competitive of all the provinces under scrutiny against the backdrop of a string of one-sided games.

Down and Fermanagh surrendered with scarcely token resistance, and Antrim’s heavy defeat at the Athletic Grounds has left the series screaming out for a giant-killer to produce the sort of spark that fired up Cavan’s memorable title triumph last year.

But the 13 points margin that separated the Orchard from the Saffrons paints a misleading picture of a game that Kieran McGeeney’s men took a long time to settle.

Antrim’s courageous and confident approach was only going to take them so far, however, and without the goal threat that their opponents possessed, this was an impossible task.

They left the Armagh city venue with their heads held high, having sent out a strong message that Enda McGinley's first year in charge has laid solid foundations that they are capable of building upon.

Kieran McGeeney's men were somewhat flattered by the final score-line, and will reflect on the problems created for them by Division Four opponents as they prepare for a semi-final clash with Division One neighbours Monaghan.

In a fascinating clash of styles, Antrim held the ball patiently in a short game that rarely deviated from the plan, while Armagh looked instantly to the long ball towards target men Andrew Murnin and Rian O’Neill at every opportunity.

The Saffrons bossed possession for long stages, but it was Orchard route one that created the first big breakthrough.

Stefan Campbell thumped in a long ball towards Rory Grugan, who took on his man and drilled his shot to the net past Luke Mulholland in the 11th minute to give his side a 1-2 to 0-2 lead.

But Antrim persisted with their well rehearsed patient game, switching the play avoiding contact, and creating the openings that Niall McKeever, Patrick McBride and Odhran Eastwood turned into scores.

Connaire Mackin thumped over an Armagh score to give them a 1-4 to 0-5 lead at the water break, but there was no sign of any panic in the Saffron ranks as they stuck rigidly to the game plan.

Mick McCann provided protection as sweeper, with 14 men behind the ball when not in possession, as they frustrated the home side, Marc Jordan, McBride and Ryan Murray all getting in vital interceptions.

Dermot McAleece and Oisin O'Neill swapped scores, and Grugan had a chance to smack in a second goal, but he planted his shot just the wrong side of a post.

Moments later, Antrim's one and only goal chance of the half fell to Ruairi McCann, but he was denied by a fine Blaine Hughes save.

McBride’s second point, a gem from a tight angle narrowed the gap to two, with Armagh ahead by 1-6 to 0-7 at the break, but the gulf between Divisions One and Four was unrecognisable. 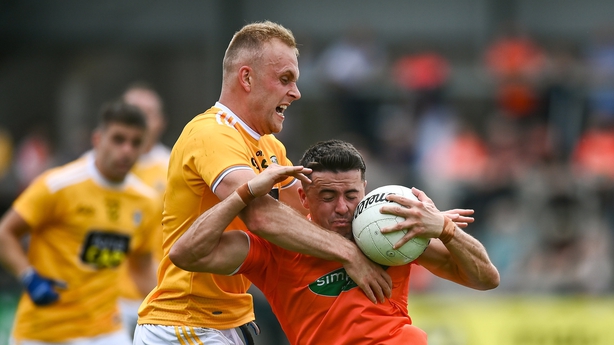 Armagh reverted to a running game as they faced the wind in the second half, moving the ball through the hands to create scores for Grugan and Greg McCabe.

But Antrim responded with superb scores from the Murray brothers, Conor and Ryan, to keep themselves close.

But the game took a decisive turn in favour of the home side when they were awarded a 56th minute penalty which Rian O’Neill rifled to the bottom corner of the net.

Antrim had barely recovered when substitute Conor Turbitt somehow squeezed home a third goal ten minutes later while under pressure from goalkeeper and defender, and Armagh pushed further clear with points from Grugan and O’Neill.

But they were caught out at the back again in stoppage time as sub Tiernan Kelly smashed home a fourth Armagh goal.