I'm still hearing murmurs of disquiet, saying it is unfair to group teams in accordance to their location, that they might have a better chance of survival with a group of eight, but I think it guarantees huge matches every week. It guarantees pressures for teams.

Last week, you had Antrim, Derry, Clare, Kildare, Mayo and Donegal and more that won. Those teams can consolidate safety and they can even try for promotion if they win in their respective divisions. Those that lost have to actually win, so the pressure is all over the place.

There are teams that are facing each other that both lost. Galway face Roscommon, Cork and Laois, Leitrim and Louth, Cavan and Longford,

It's brilliant for us. It ensures competitiveness. There are a few huge matches, Armagh and Tyrone will be big. If Armagh can win this, I don't think anyone saw them staying up in Division 1.

In Thurles, Kerry and Dublin. In 2001, I played there myself, it was one of the most electric atmosphere I ever played in. We all remember Maurice Fitz's kick. 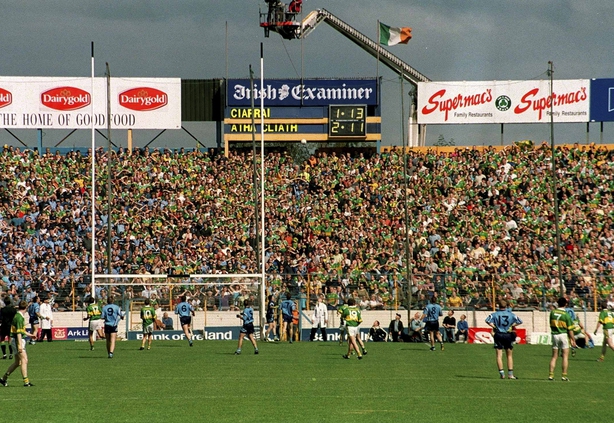 I hope they just both field their strongest teams available.

I think we're going to get a cracker. I think neither team will want to lose, but I do feel it's an important match in the development of Kerry.

I think a win will break down a barrier that can only give them belief. It's a massive game for Kerry. Belief that they can build on when they get to Croke Park. Kerry played brilliant last week and we drooled over it, but I think Dublin will have answers to what Galway didn't.

David Clifford and Paudie Clifford and Darragh Moynihan, all the lads that played well, will get closer attention.

Kerry's defence will be tested. Kerry squeezed Bernard Power to death the last day, and they'll try to focus on Michael Shiel. I don't know if Michael Shiel will play in goal or Evan Comerford, but Dessie Farrell will learn also.

He's got you players like Tom Lahiff and Dara Mullin. It's a massive, massive game.

This Dublin team have had some journey over the last decade.

All of the lads close to their set-up point to a league win over Kerry in 2010 in Killarney as a catalyst that started them off.

I think Kerry or at a similar point.

It's a cracker for us all and too tight to call, but I hope it's a Kerry win.