Brave Longford overcame the horrendous conditions and the stiff challenge of Louth in Mullingar to secure their Leinster SFC quarter-final place.

Repeating their defeat of the Wee County in Division 3 of the Allianz League, Padraic Davis' side were grateful to midfielder Darren Gallagher who struck 1-03 amid constant rain and on a heavy pitch.

Longford will be back in action next weekend against Laois at home but Louth's Championship is over, bringing to an end a difficult season that also yielded relegation to Division 4.

Sam Mulroy can feel most hard done by as the Louth full-forward accounted for all of his team's 1-07 tally.

Granard man Gallagher was at his best in the first-half but also hit an important point late on while substitute Robbie Smyth scored a crucial two points after his introduction.

A heavy downpour that battered TEG Cusack Park beforehand and which continued throughout the opening quarter made for torrential conditions.

Basic ball handling and distribution proved difficult though Longford coped best in the worst of the rain and opened up a significant early lead.

They led 1-02 to 0-01 with all of that 1-02 coming during an unlikely blitzkrieg between the seventh and eighth minutes.

Liam Connerton and Rian Brady points sandwiched Gallagher's goal which was a surprisingly free flowing move that wouldn't have been out of place on a hard pitch under the summer sun.

Gallagher was twice involved in a series of hand passes that shredded the centre of the Louth defence and he maintained his run to accept a pass from Kevin Diffley and rifle in from close range.

Louth, playing with a two-man full-forward line of Mulroy and Conor Whelan, and with number 13 Patrick Reilly reverting to the role of sweeper, battled back impressively.

In fact, they led 1-03 to 1-02 after 28 minutes thanks mainly to Mulroy who curled over two frees and rifled a 27th minute goal after a probing run in from the left.

In a tit-for-tat scoring encounter, the sides were level at 1-03 and 1-04 apiece before Daniel Mimnagh pointed for Longford to send them in 1-05 to 1-04 ahead at the interval.

Gallagher scored 1-02 of Longford's first-half tally while Mulroy accounted for all of Louth's scoring. 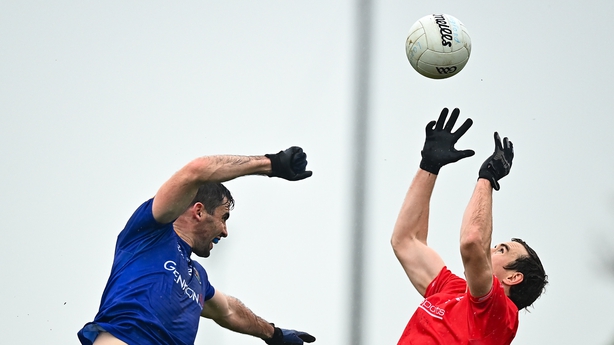 Worryingly for Longford, Gallagher came out early for the second-half to test if his apparently injured left ankle was up to it. He looked to be impeded while running but continued on and was less influential in the second-half before hitting that late score.

Louth got the better of the third quarter exchanges and tied the game up for the fifth time just before the second water break at 1-06 apiece following back to back Mulroy points.

The second of those from Mulroy was Louth's first from open play, in the 52nd minute.

Longford finished stronger and ultimately outscored Louth by 0-03 to 0-01 in the closing 10 minutes with Smyth striking two of those and Gallagher the other to secure their date with Laois.