Kerry midfielder Paul Murphy insists that his side don't feel the weight of history on their shoulders as they attempt to stop Dublin’s quest for an historic fifth consecutive All-Ireland title.

Much of the focus in the build-up to Sunday’s showpiece final has been on Dublin’s drive for five and it’s allowed Kerry to come in under the radar somewhat.

Murphy is happy to see all the pressure and expectation be placed at the feet of the Dubs and for him, the final is a one-off game where past results or victories don’t come into it.

"This will be my third final and I’m in a really privileged position to be playing in games like that," he told RTÉ Sport.

"Kerry v Dublin, people would see it as an old-fashioned, traditional rivalry within the GAA but we’re just focusing on the game.

"It’s one game, it’s a chance to win an All-Ireland and tradition won’t come into it for us.

"You don’t need me to tell you that Dublin are an incredible team, they have been for a number of years. What they’re going for, five-in-a-row, it’s not relevant to us, we’re going to win an All-Ireland final. 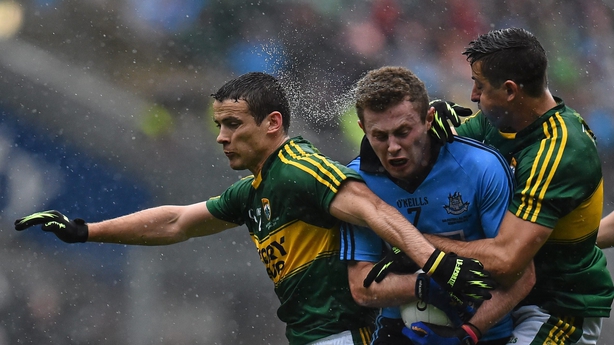 Murphy was part of the Kerry team that won the last All-Ireland before Dublin began to monopolise the title, turning in a man-of-the-match performance against Donegal in 2014.

He was very much the young-gun of that Kerry team and was surrounded by older, more experienced players like Marc O Sé and Kieran Donaghy.

This time around it’s Murphy’s who the younger members of the Kingdom team will be looking to for leadership and it’s a role he’s relishing.

"Just in the last few weeks at home I can across the programme from that 2014 final and I don’t know what the team will be the next day, but there’s a chance that there could be more guys that played in the minor final that day than in the senior final starting.

"We had a few really experienced guys around us at that time, guys who had been playing in their sixth or seventh final.

"We’re not in that position at the moment, we have a younger panel and we have a lot of guys who played in minor All-Ireland finals and this is a first senior final.

"It’s a learning curve for them, but they’ve really taken to the challenge of senior football and they’ll all be hoping to drive it on again the next day."