Beaten Leinster finalists Meath dug deep in Portlaoise to secure a dramatic one-point win, dashing Clare's dream of a place in the Super 8s and advancing themselves by the narrowest of margins.

Michael Newman's 1-06 haul and a goal from joint-captain Bryan Menton ultimately propelled Meath to a rare Round 4 qualifier win and a place in the All-Ireland quarter-final group stage for the first time.

It was redemption of sorts for Andy McEntee's men after shooting just four points in last month's Leinster final defeat to Dublin.

But they were clinging on for dear life at O'Moore Park late on as Clare reduced a four-point deficit to just one and threw the kitchen sink at Meath in search of an equaliser.

'It's huge for Meath football' - man of the match Donal Keogan on today's win over Clare #RTEGAA pic.twitter.com/OfXFHlKoIw

Clare outscored Meath by 0-06 to 0-03 in the closing minutes but just couldn't reel in the Royals who advance to play Donegal in Ballybofey in the opening round of the Super 8s next Sunday.

Meath came into the contest burdened by the weight of history as no beaten Leinster finalist since Kildare in 2009 had won their next game in the qualifiers.

Round 4 has generally favoured the teams coming through from Round 3, as opposed to the beaten provincial finalists, and Clare arrived in Portlaoise with momentum after wins over Leitrim and Westmeath.

Meath slipped up at this stage in 2012, 2013 and 2014 following Leinster final defeats to Dublin so were desperate to finally make it to the last eight.

It was ultimately a meeting of two well matched teams with the sides level on eight occasions in a rip-roaring first-half that finished 1-09 to 0-12.

Jamie Malone was terrific for Clare and helped himself to four first-half points, all from play.

Gary Brennan lined out at midfield but moved into the half-forward line soon after and powered through a tonne of good work.

He fisted over a ninth minute point but his moment of the game arrived close to half-time when he raced back up the field and dispossessed Cillian O'Sullivan who was bearing down on goal for Meath.

Almost in slow motion, but the ball finds its way over the line, just about.
See the highlights tonight @rte2 from 9.30pm #rtegaahttps://t.co/cLrWA1hgEB pic.twitter.com/MJm8sTPdhs

Padraic Harnan played in Donal Keogan and when his shot was cleared off the line by Kevin Harnett, Menton was on hand to drive in the rebound.

It should have left Meath sitting pretty at half-time but Clare, typically, came roaring back with points from Gordon Kelly and Malone to level it.

A game already simmering with excitement boiled over just minutes into the second-half when the teams traded a series of significant scores.

It was poor defending from Meath as Cooney beat both Meath 'keeper Andrew Colgan and corner-back Shane Gallagher to Cian O'Dea's ball in.

It left Clare 1-12 to 1-11 ahead but that would prove to be the high point of the game for the Munster men.

Meath's response was to grab a goal within seconds which put them into a lead they wouldn't relinquish this time.

Newman palmed it in after a one-two with Harnan which came at the end of an eye-catching move through the centre of Clare's defence.

Newman collided with the post in the process and had to be replaced with a leg injury.

It robbed Meath of their main man up front but they moved four points clear soon after and ultimately relied on that cushion as Clare's brave bid to force extra-time was thwarted. 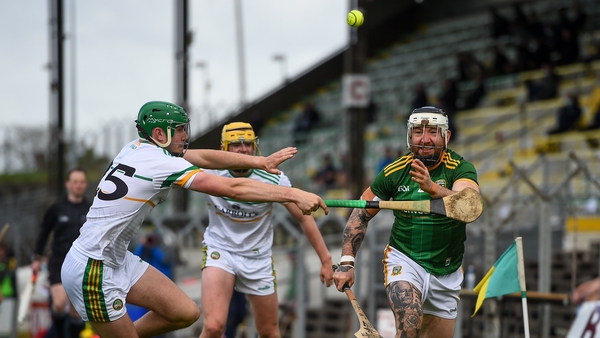 Offaly enjoy easy win over Meath in Division 2A