Galway manager Kevin Walsh is concerned with the situation they find themselves in ahead of the Allianz Football League opener with Cavan next weekend as injuries and absentees mount.

The Tribesmen were disappointing in Tuam on Sunday, scoring just 1-05 against Roscommon and looking like a team with little preparation under their belt.

Players from Corofin and An Spidéal have been sitting out the early stages of the year as Galway had over a dozen players out for the game with the Rossies.

Worryingly, more injuries problems emerged on Sunday, with Johnny Heaney and Barry McHugh picking up knocks and Cillian McDaid pulling out prior to throw-in.

The Galway boss told RTÉ Sport: "We were very much below par and we had eight yellows, three blacks and a red so obviously we have to have a look at that as well.

"Discipline wasn’t the best on the day and we need to look at it again to see if it was all discipline or was there some funny decisions as well out there. But that is beside the point, we have to look at our own side of it. It was a game we needed very, very  badly.

"The worrying thing is the amount of players we are heading into the league without. Before today it was 13 players and looking at the few things inside, there could be a few more by next week. 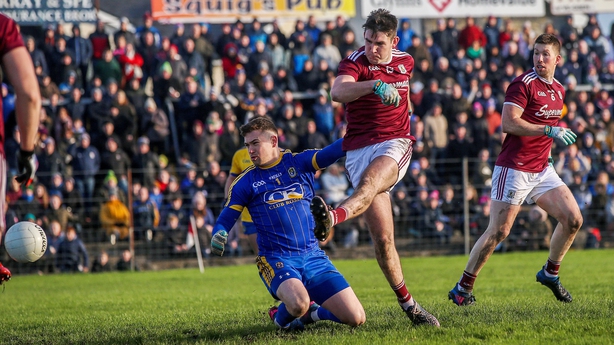 "The bonus for today is getting this game. There was a lot of rustiness, particularly in the first half, with very bad hand-passing and kick-passing. There was also bad decision-making. That is something we have to go after.

"We definitely wouldn’t be prepared as well this year at this stage as we were last year. The club season went on a bit longer and we gave the guys a bit of a break before Christmas which was important. We are where we are but it is going to be very tough work."

Galway had six wins from seven on the way to the league final last year –a feat that will be very hard to repeat this year.

Walsh is looking to the positives his forced experimenting will bring.

"Heading to Division 1 is great. You’ll always have your worries, but then again it is a chance for people to step up.

"Come the Championship you’ll be hoping an extra one or two will be step up from somewhere else.

"This could be short-term pain for long-term gain. We just have to take it is. We’ll be looking forward to get into next but it’ll have to be better than Sunday."