By Jackie Cahill at Fitzgerald Stadium

Kerry are Munster senior football champions for a 78th time after securing a ten-point victory over Tipperary in this afternoon’s provincial decider at a sunny Fitzgerald Stadium in Killarney.

Paul Geaney bagged 2-3 for the hosts as Tipperary, appearing in their first provincial senior decider since 2002, started well and goaled within a minute before being outclassed.

In truth, this was a routine victory for Kerry but Tipp showed enough going forward, when they did decide to display some adventure, to suggest that the Kingdom’s defence can be got at.

Tipp scored two goals, could have had another, but seemed to content to sit deep for the most part and absorb Kerry pressure.

Perhaps a more attacking approach could have yielded further dividends for Tipperary but Kerry put up a brick wall around the middle third and the visitors struggled to break through.

They did get in for a first minute goal, scored by Jimmy Feehan, but once Kerry settled, there would only be one winner.

This was the Premier County’s first Munster SFC final appearance since 2002 and there was a gulf in class once Kerry found some sort of rhythm.

The writing was on the wall for Tipperary at half-time as a nine-point turnaround saw them trail by 1-4 to 2-7.

Kerry had a breeze at their backs in the opening half but were slow to settle and they were rocked by the concession of a goal within 35 seconds.

Peter Acheson and Philip Austin were involved in the build-up before Jimmy Feehan, a late replacement for Martin Dunne, slipped a shot beneath Brian Kelly.

The goalkeeper got something on it but the ball bounced over the line and Tipp had a dream start in front of a 21,512 crowd.

There was a further boost for Tipp later in the half when Colm Cooper went off injured, the ‘Gooch’ replaced by Michael Geaney.

As the half wore on, Kerry grew and while Tipp’s short kick-out strategy to the flanks presented them with plenty of clean possession, they struggled to work the ball through the lines. 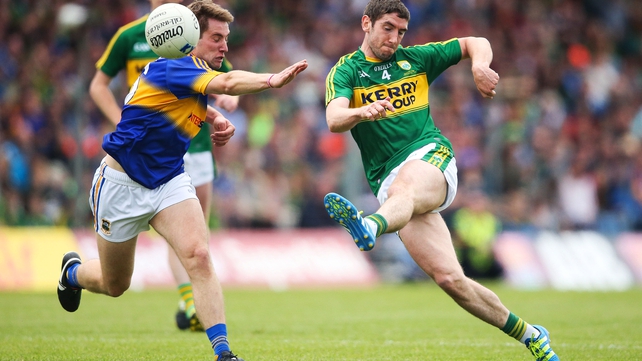 Indeed, Feehan’s goal was Tipp’s only score from play in the entire half, with Kevin O’Halloran converting three frees and Michael Quinlivan knocking one over.

Kerry found scores from open play easier to come by and they had five players on target by half-time, as skipper Bryan Sheehan added two frees.

Despite falling that goal behind from Tipp’s first attack, Kerry regrouped and were level at 0-4 to 1-1 by the eleventh minute.

Paul Murphy’s 17th-minute goal handed the Kingdom the whip hand, a well-taken effort slipped into the corner past Evan Comerford to conclude a lightning counter-attack.

The Kingdom got in for a second goal seven minutes later, substitute Geaney was the creator for his cousin Paul, who turned inside before cracking a rasping drive past Comerford.

Mikey Quinlivan then forced an excellent save from Kelly as Tipp went in search of goals, as Paul Geaney kept the scoreboard ticking over for Kerry with a point.

Their third goal followed soon after and it was that man Geaney again on the end of a pass from sub David Moran before finishing brilliantly with a low, left-footed strike. 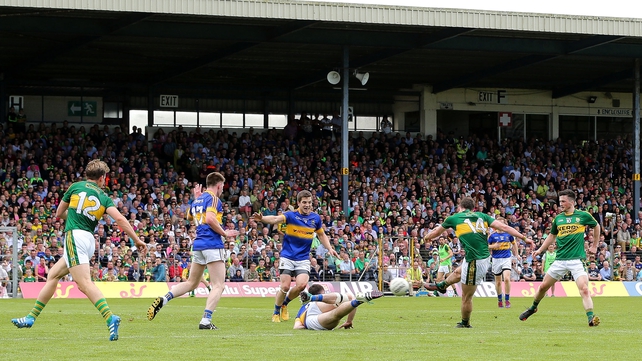 But to their credit, they responded within a minute as Quinlivan fed Robbie Kiely for an excellent goal.

But Tipp’s struggles in front of goal were illustrated by the fact that O’Halloran’s point in the 53rd minute was their first from play.

And Kerry, who didn’t register a single second half wide, could afford to run their bench as clock ticked down, with former Footballer of the Year James O’Donoghue among those to come on, making his first appearance since last year’s All-Ireland final.

O’Donoghue marked his comeback with three points down the home straight but injury sustained by Cooper will be a concern for Kerry. 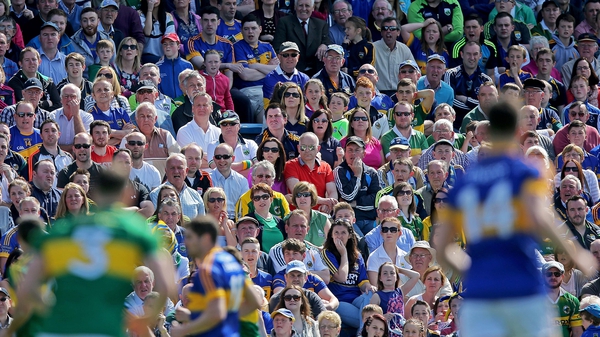