The ability to grind out games was key to Kerry's victory over Tyrone in the All-Ireland SFC semi-final, according to Kingdom corner-forward James O'Donoghue.

In what was an engrossing encounter at Croke Park, the reigning All-Ireland champions kicked the last four points to book their place in the September decider.

The Legion clubman also sent out a message of intent as he and his colleagues stand 70 minutes away from retaining their title.

"We came up here to do a job and that was to get back to an All-Ireland final and we have now achieved that," he added.

"Obviously today's game was going to be emotional for some after what went on in the noughties. We want to beat everyone. We're champions and we're coming back to Croke Park to retain our trophy."

Kerry boss Éamonn Fitzmaurice echoed O'Donoghue's comments on having to grind it out after Tyrone drew level inside the final ten minutes, spurred on by Peter Harte's converted penalty.

"It was a tough day for football as the conditions were unforgiving. Obviously Tyrone were going to make it very hard for us. They scored the penalty and then drew level.

"We knew that if we could get our hands on the ball and get it up the field that we'd be able to get a few points and that's what happened. In fairness to the lads, there is great unity in the group and experience. We've been in tight corners and thankfully that bit of experience told at the end." 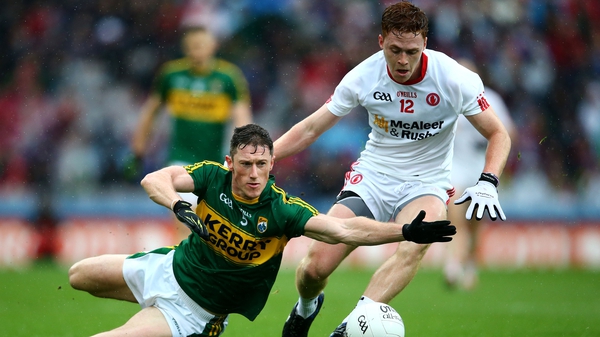