Fourteen-man Armagh won the Allianz FL Division 3 title with a 0-16 to 0-11 win over Ulster rivals Fermanagh at Croke Park.

Tony Kernan converted four frees to give Armagh a 0-8 to 0-6 interval lead, despite the loss of Finian Moriarty to a second booking.

Kernan and Ethan Rafferty added scores, and while Fermanagh responded with points from Sean Quigley and Tomas Corrigan, the Orchard men finished strongly, and could have had three goals, but for superb saves from Thomas Treacy.

The Ernesiders got off to a flyer with early points from Tomas Corrigan, and Sean Quigley, from a ’45.

Armagh, who had to start without their two midfielder, skipper Ciaran McKeever and Aaron Findon, both late injury cry-offs, fell three points behind when full forward Quigley stroked over a free.

Tony Kernan finally got Kieran McGeeney’s men off the mark with a 12th minute free, but that was immediately cancelled out by a delightful angled effort from Ruairi Corrigan.

The experienced Ryan McCluskey stood tall at the heart of the Erne defence, while Ryan Jones and Richard O’Callaghan gave them a decided edge in the middle of the field.

The Orchard attack was lacking in a cutting edge, and their lack of conviction was underlined when Kevin Dyas blazed a golden chance wide. 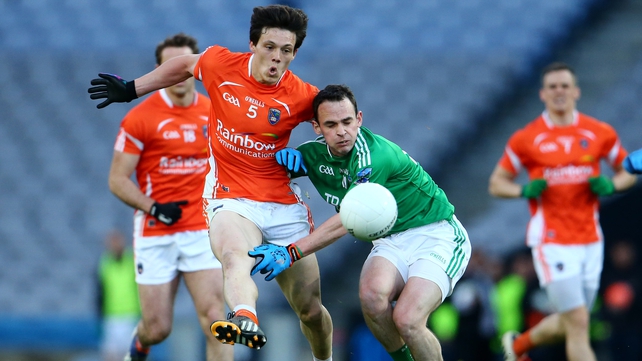 Once Ethan Rafferty began to win ball around the middle, they started to move with an increasing level of menace, and closed the gap through Kernan and Jamie Clarke.

Aidan Forker should have had a goal when sent clear by Micheal McKenna, but his shot flew over the bar to bring the sides level in the 22nd minute.

Kernan had just edged Armagh ahead for the first time when they lost centre back Finian Moriarty to a second booking in the 26th minute.

But they stepped up their game and took a 0-8 to 0-6 lead into the interval, and would have been further ahead had goalkeeper Thomas Treacy not saved superbly from Dyas and later from Andrew Murnin.

Armagh were boosted by the introduction of skipper McKeever for the second half, and stretched the advantage through Kernan and Rafferty.

Defensively, they were now much tighter and decisive in the tackle, with McKeever providing protection around the 45 metre line.

Fermanagh struggled to find a way to capitalise on their numerical advantage, and were behind by 0-12 to 0-6 by the time Quigley converted a 46th minute free for their first score of the second half.

Yet another goal chance went a begging when Clarke and Charlie Vernon combined for Murnin to have a crack, but once again Treacy kept the effort out at close quarters.

Fermanagh turned the game back in their favour to pull scores back through Tomas Corrigan and Quigley, and they were just three points adrift going into the final 15 minutes.

But Armagh never allowed the intensity to wane, and with Jamie Clarke always looking to create openings, they crafted scores for Ciaron O’Hanlon, substitute Stephen Harold and Kevin Dyas to see out an encouraging win. 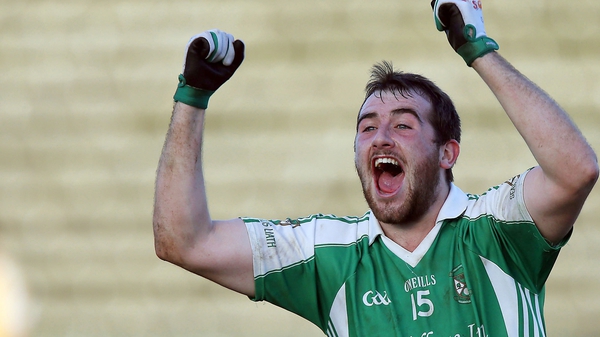