Cork manager Brian Cuthbert was disappointed to see his side lose their unbeaten record in the Allianz Football League on Sunday against Donegal but said the match embodied how Division 1 can be.

The Rebels were beaten by a single point as a fightback following the dismissal of Michael Murphy fell just short.

Tomás Clancy's goal gave Cork hope but they left Ballyshannon empty-handed after a 0-12 to 1-08 loss.

“We leave here a bit disappointed but I suppose we showed good character and spirit to come back in a game that we were not doing quite so well in the middle period of the second. I'm happy enough in lots of ways but disappointed.

“We had a lot of chances in the first half and we just didn't take them. The final pass didn't go to hand and it was very important that the final pass went to hand today [because of the conditions].

“Going in level 0-05 each after playing with the wind wasn't a good position but sometimes it's easier to play against the wind when you're playing Donegal and I think we showed in the good enough spirit in the second half, but not good enough.

“In Division 1 this year, I think you get very, very good teams. Teams are going to take points off each other. These trips on the road are difficult. We have Mayo and Kerry at home and they will be difficult so it's going to be very, very tight. We lost today by one point. We have a lot to take away from the game. But at the same time, we think we are good enough to win these games and that's why we are disappointed.”

Donegal manager Rory Gallagher admitted the red card turned the game in Cork’s favour and left his side hanging on.

“It was a clear turning point. At that stage we were very much in control, playing with an exceptionally strong breeze and maybe five points up and playing really well. It handed the initative to Cork and in fairness to them they capitalised on it. They scored a great goal from their point of view and in many ways we were clinging on.

“Conditions were exceptionally difficult. In fairness the pitch help up really well considering the amount of rain that fell overnight. The gale force breeze made it very difficult to play.

“Every game you go out you want to win but particulary your home games in front of your home crowd. You want to do well and put up a good performance and win as many games as possible.” 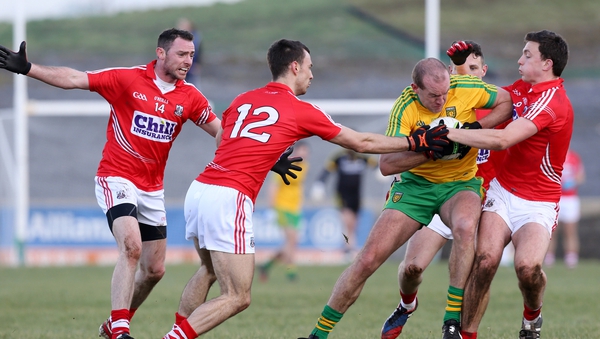 Donegal edge out Cork in Ballyshannon