Dublin manager Jim Gavin has called on the GAA to proceed with the introduction of a clock and hooter system for timing games, despite opposition from Central Council.

The proposal to take responsibility for time keeping out of referees' hands and end the game on the first dead ball after the hooter sounds won overwhelming support in 2013 after the Football Review Committee signalled its support.

It is already in place in Ladies football and was trialled in the college competitions ahead of an expected debut this year.

However Central Council is now expected to introduce a motion calling for the system to be scrapped at Congress in Cavan at the end of the month.

"I’d be disappointed if that does happen," Gavin told RTÉ Sport.

"It came from a proposal from a Wexford club. The GAA, when they make decisions, they are very democratic, it can sometimes procedurally be a bit slow, but that’s the process.

"The Ladies football have done a fantastic job. It would add more excitement to the game, so it’s a little bit baffling why it hasn’t taken place. I don’t know the logistical issues but they seem pretty straightforward to me."

"It would add more excitement to the game, so it’s a little bit baffling why it hasn’t taken place."

One of the concerns raised was the potential for teams to waste time through frivolous substitutions but the answer is straightforward for Gavin.

"If a team is bringing players on late in the game to run the clock out then put it in that the clock stops," he said. "It’s as simple as that.

"There are lots of easy solutions to this and I think it would be a fantastic initiative. I think the games are exciting anyway, but it would really add to it, particularly when the games are so close.

"Not only for the players, but the viewing public at home and on TV and for the spectators as well, that would make it more interesting for them.

"Anything that can ease referees’ burden and gave them more capacity to manage the game can only be a good thing.

"I think it’s growth in our game, and it was given from the clubs to Congress and Central Council and it should have been passed."

Gavin also supports the proposed reform of the GAA fixture list which would see all competitions completed within the calendar year, moving the St Patrick’s Day club finals to December.

Dublin are currently without key players like Diarmuid Connolly and Ger Brennan as St Vincent’s attempt to defend their All-Ireland crown.

"It’s a step in the right direction," Gavin said. "I think it’s the start of the process. Paraic Duffy has mentioned that he supports it and it’s great to see that coming from the leadership within the Association.

"In terms of the team, we just get on with it, the world moves on. But it’s unfortunate for the [club] players involved. There are some really talented players on all teams that are left in both the hurling and football club championships that could play with their counties.

"It will benefit the players and clubs as well to have a much more structured approach to our fixture list."

Gavin was unsure about the director general’s proposal to mandate kick-outs going past the 45-metre line, however, suggesting that could lead to knock-on effects such as having to reform the hand pass rule.

Meanwhile, Dublin face Donegal on Saturday for the first time since the Ulster champions shocked the much-favoured Dubs in last August’s All-Ireland semi-final.

Gavin insisted his side had put the disappointment of that defeat behind them and didn’t think they would feel there was something to prove at Croke Park.

"On Saturday there will be 26 different individual thought processes but collectively, no," he said.

"We met six days after that game, washed it up, players went back to their clubs and the world moved on. We haven’t referenced it since. We will focus mainly on getting our own game right for the weekend, as we always do.

"We didn’t perform, that’s the big thing. We’ve always gone after getting a performance and trying to work on that process and that process didn’t work against a very good Donegal side.

"But I learned about them over the last three years that they are a mentally tough group of men. They were, naturally, disappointed by the way the game went but quite quickly they picked themselves up and they are very motivated for the season ahead."

It was the Round Towers club man’s first championship defeat as Dublin manager since taking over after the 2012 season but he was adamant they would learn from the experience.

"There were some things we tried in the game that worked, we created over 30 scoring chances in the game but didn’t take them unfortunately, and some things defensively didn’t work," he insisted.

"Whether we win or lose we are always trying to grow as a team, absolutely there was lots of learning from the game last August but hopefully we’ll rectify that over the coming weeks."

Dublin lost their opening Allianz Football League clash to Cork last Sunday but Gavin suggested his focus at this stage is on developing his panel rather than worrying about securing a third league crown in a row.

"At this time of the season we're looking for performances,” he said.

"We would not be satisfied if we get two points on the board and don't perform particularly well, longer term that won't do us any good at all.

"There were a number of players that performed well in the pre-season tournament [O’Byrne Cup] that we wanted to give more game time to. They deserved that after putting in some very good performances against Maynooth, Offaly, Laois, Meath and Kildare.

"We’re giving players exposure in very competitive games, in situations and scenarios they have to figure out, when the game is in the balance and they have to try and work themselves towards getting the result.

"If you look back on our team selections last year, you’ll see something quite similar.

"If everything works out well, we’ll do well in the National league and we might get one or two more games in April."

Jim Gavin was speaking at the launch of Ballygowan water and Energise Sport as the official hydration partners of Dublin GAA. 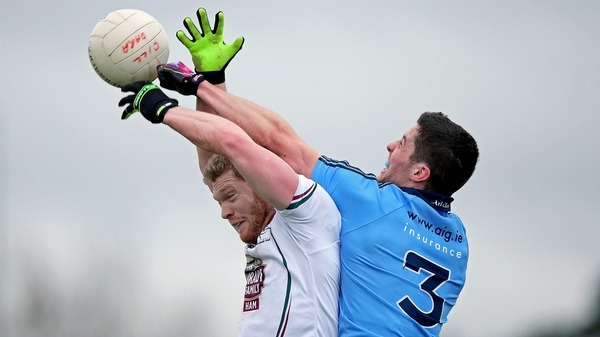