Despite drawing with DCU, Meath booked their place in the O'Byrne Cup semi-final and an encounter with Dublin next weekend.

The goals on the night in Navan came firstly from Meath’s David Bray, after just two minutes, and DCU substitute Conor McGraynor four minutes into the second-half.

McGraynor's goal for DCU closed the gap to 1-07 to 1-06 in the Royal County’s favour, before Conor McHugh soon scored the equalising point for the students.

Niall Moyna’s DCU charges then went on to lead by three points, 1-13 to 1-10, with less than 15 minutes remaining.

However, Meath rallied to send over four consecutive points to take the lead after scores from half-time substitutes Bryan Menton and Nicky Judge, before Graham Reilly hit the equalising point, followed by a Mark O’Sullivan score edging Meath in front 1-14 to 1-13.

Diarmuid O’Connor replied for DCU with four minutes to go, but Meath held the students at bay to hold out for the draw, and book their spot against Dublin in Navan again next Saturday, as they cannot be caught in the Group C standings.

Meanwhile in the Dr McKenna Cup at Breffni Park, a Cillian O’Connor goal from the penalty spot had given  UUJ a 1-06 to 0-05 lead over hosts Cavan at the break.

That goal proved to be decisive as Cavan outscored UUJ five points to two in the second period, but Jordanstown weathered the snow and Cavan fight back to hold on for the 1-08 to 0-10 victory.

Both teams can still top Section A with Monaghan and Down due to meet tomorrow, where a Down win would to leave the section wide open. 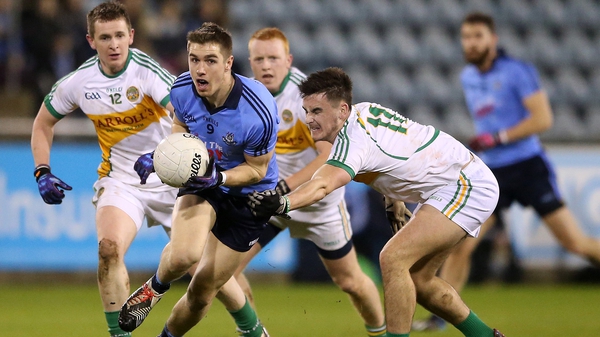