"It's not something you would be particularly focused on when you're playing but certainly in a couple of years, we'll be able to have a bit of barstool talk and enjoy looking at that list," the Dublin defender said. "And maybe go one more than Portlaoise as well."

Dublin swept the Offaly champions aside with an early blitz, scoring 1-05 without reply and spurning several goal chances before Tomas Quinn raised a green flag.

"There were great opportunities in that first period," said Brennan.

"We didn't take an awful lot of them, I think we [often] took a point too many when a point might have been on.

"But you've got to give credit to the Rhode defensive effort as well, in trying to limit the amount of scores we were getting.

"But when you're creating the opportunities that's a positive in itself and we'll just try to keep building on that."

Rhode will be disappointed with the 1-13 to 0-06 final score but Brennan believes that a tough semi-final victory over 2011 Leinster champions Garrycastle left the Dublin side battle-hardened.

"Rhode hit us particularly hard, but compared to our previous game against Garrycastle, we were prepared for that type of hard-hitting game, with the conditions and what have you.

"Structurally, in defence and midfield, we would have focused on how Rhode were looking to move the ball, and I think we curbed that influence they were looking to have in the full-forward line.

"The last 10 minutes of the first-half we struggled to cope with them running at us but that's something we have to work on.

Brennan also lent his weight to proposals to finish the club championships within the calendar year rather than the current schedule, which sees semi-finals take place in February before the finals in Croke Park on St Patrick's Day.

"When you're winning, of course it's fine, it's great to be here," he said. "[But] it would be great if the season was shorter and we had December off.

"I could certainly envisage the two All-Ireland semi-finals being played in the last couple of weeks of November or first week of December.

"Then you could have a double-header for the football and hurling [finals] in the following two weeks and then everything's cleared up in the one calendar year and you've a good month or two to let the body relax." 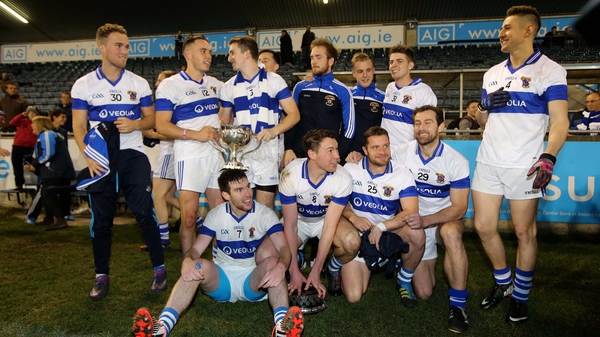