Kieran Donaghy has said “anything is possible” after Austin Stacks sealed the Munster Club SFC title, and that his side will “give it a rattle” when they face Ulster champions Slaughtneil next year.

The Kerry club were 1-03 to 0-00 down and reduced to 14 men in the early stages of the game, but they staged a remarkable comeback to seal a win over The Nire of Waterford.

“We knew they were going to put it up to us, and they got off to an unbelievable start,” Donaghy told RTÉ Sport after the game.

Donaghy praised man-of-the-match, Shane O’Callaghan, whose goal stemmed the tide and set Stacks on the road to recovery.

He said O'Callaghan had been primed for such an impressive performance.

“I said it to a few lads in Ulster Bank [where Donaghy works] this week; they were asking me who was going well in training, and I said, ‘If you’re going to back someone for man of the match, back Shane O’Callaghan.’ I just thought: his eye was in all week.

“I just had a good feeling about him and I just thought he was outstanding today, against an unbelievable defender in O'Gorman. I played with him for Munster; a very well-rated defender.

"For Shane to come out here for the biggest day of all for the club, a young fella trying to get on the Kerry scene; to put in that kind of a performance was massive.”

"I said, ‘If you’re going to back someone for man of the match, back Shane O’Callaghan.’ I just thought: his eye was in all week"

Donaghy said Stacks had needed to simply get their hands on the ball to get back into the game when they found themselves so far behind.

“I think Shane’s goal was obviously a huge one,” he said. “It just gave us that bit of a settling period, almost, [so] that we were able to calm down and push on to the game.

“Then we were down to 14 men, and we had to really dig deep, and I think Kieran McCabe, our physical trainer – as well as all the other management team – has to take massive credit, because, with 14 men, to do the running we did out there today, against a running team in The Nire, is testament to the work he’s done with us this year.”

Donaghy said that Shane Carroll’s red card had been tough for Stacks, and revealed that Carroll had been sick in the lead-up to the game, including vomiting on Sunday morning.

“Maybe he was just that bit off, maybe he just wasn’t at it, mentally, maybe, because he was so worried about vomiting all morning.”

“John Dennis came on and gave an inspirational shoulder there, put the man upside down"

Having gone down to 14 men, Stacks went on to restrict The Nire to just one further score with a dogged defensive effort. Donaghy was full of praise for his team’s defenders.

“John Dennis came on and gave an inspirational shoulder there, put the man upside down and we got the turnover out of it. Stuff like is nearly worth a score to you.”

After coming through this game, Donaghy said, the club will now re-group over Christmas ahead of their game against Ulster champions Slaughtneil on 14 February.

“We’re going to give it a rattle. Anything is possible,” he said. “It’s all new for us. This is a new journey and this is a very young Stacks team.

“Daniel Bohan used to be always on to me about laying a foundation; whether we were win or lose any trophy, that we’d lay a foundation for the young players, to come through, that they could follow in something. And thankfully we’re doing that now.” 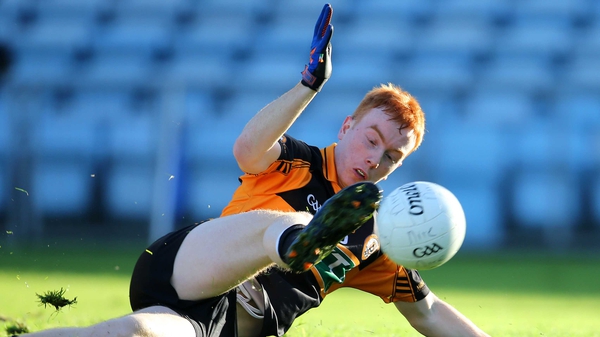