Dessie Dolan was delighted to prove Garrycastle’s credentials as they earned a crack at St Vincent’s in the Leinster Club SFC semi-finals.

Garrycastle came out on top of an extremely close encounter with Killoe Emmet Óg on Sunday, 1-11 to 1-10, with Dolan’s display pivotal.

He set up the Garrycastle goal as well as hitting the winning point for the Westmeath outfit.

Dolan told RTÉ Sport: “Killoe are a good team. We knew they were coming down here with plenty of ambition to win. My father trained them back in the 1980s. I used to go down and train with them myself.

“So I knew the pedigree of footballer that was coming to Westmeath today. It was a real battle. It was a great game I thought. It was tough and it was tight with slippy conditions.

“There was lots of tough calls and a tough game on the referee but a good game overall.

“There was huge performances out there. Mickey Quinn was super. Killoe have great players and pedigree. It's a very tough competition. I'm sure there are surprises across the country, look at the Crossmaglen.

“We're thrilled. We won the competition this year, a lot of people wrote us off, we're in Leinster and now the semi-finals so we're delighted today.”

After retiring from inter-county with Westmeath, Dolan said he is keen to make as big a contribution as he can with his club and their success is invigorating his outlook.

“I had a great few years with Westmeath. I'll give the club a few years. I'm really enjoying it. There is a great bunch of lads there. We're a small club in Athlone and when you have success it's just about keeping on winning. We didn't expect to be training this late in November but we'll go with it.

“I missed one or two [scores] in the middle period that I was disappointed about. But it is crucial to step up when it counts. To get the last point, I think it was the crucial one, and that brought us home.”

There was a controversial moment in the final seconds with the referee giving a free out when Killoe had the ball in the back of the net – Dolan admitted he was relieved to see the decision made.

“He clearly blew it before the ball went in. I don't know what he blew it for but we're not going to complain.

“We were trying our best to make him choose the right decision and I think he did in the end! Killoe will be very disappointed.”

Emmet Óg manager Tommy Cormack felt the decisions did not go with his team in the quarter-final.

“From our stand it was very difficult to know. It's a very hard call. It means we're out of the Championship at this stage. We're absolutely gutted for our lads. They put in a tremendous performance. There were a few calls in the first half that didn't go our way.

“But look, you have to take the rough with the smooth and we felt a little bit hard done by on the day. We will have to live to fight another day.

“You clasp at anything at that stage to get a victory. We thought it might break in our favour but obviously it didn't.”

He said Dolan’s influence got Garrycastle over the line.

“Dessie is instrumental in most of Garrycastle's scores. He is a very influential player and one that every team would aspire to have. His work-rate is phenomenal too and he did make the difference today.” 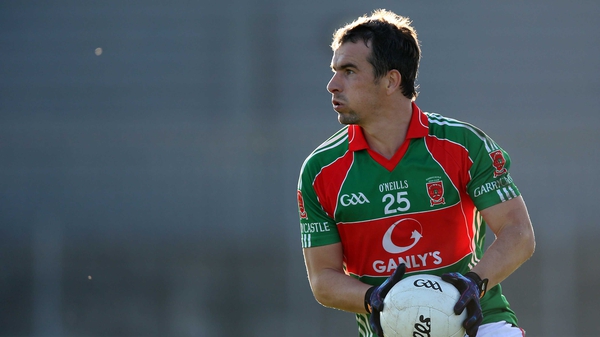