Ballintubber reached their first Connacht SFC final after a 3-10 to 1-13 win over Roscommon champions St Brigid's at MacHale Park, Castlebar.

First-half goals from Padraic O'Connor and Alan Plunkett set Ballintubber on their way with a 2-04 to 0-07 interval lead, before Cillian O'Connor hit their third nine minutes from time to finally stall St Brigid's' brave comeback.

The win, which is their first ever triumph in the Connacht provincial championship, was carved from a solid defensive effort, but executed by their ruthlessness in front of goal.

Once again their inside forward line proved unstoppable and set up a provincial final with Galway winners Corofin in Castlebar.

The goal threat from Ballintubber was the real highlight from the first half as the O'Connor brothers, Cillian and Padraic, and Alan Plunkett impressed with their ability to create space in front of Shane Curran's goal.

The Roscommon champions raced into an early lead as Senan Kilbride slotted a second-minute free from the right to open the scoring, before Frankie Dolan doubled the advantage a minute later with a good point on the turn.

A sixth minute 45 from Padraic O'Connor got Ballintubber on the board, but the Mayo side were made to pay for their tough tackling in the eighth minute when Senan Kilbride landed his second free.

Alan Plunkett benefited from a sweet Alan Dillon pass for his first point in the ninth minute, but five minutes later Peter Ford's side struck a decisive blow when Padraic O'Connor was sharpest to a break in the square to fire past Curran and a 1-02 to 0-03 lead for the three time Mayo champions.

Cillian O'Connor kicked his first point of the game in the 18th minute when he was left all alone to open out a three-point advantage, but St Brigid's showed plenty of hunger for the fight when Karol Mannion and Kilbride kicked good points to put the minimum between the sides in the 25th minute.

However, Ballintubber rattled their second goal of the game a minute later when Alan Plunkett finished well as he cut in from the right, which gave his side a three-point half-time lead. 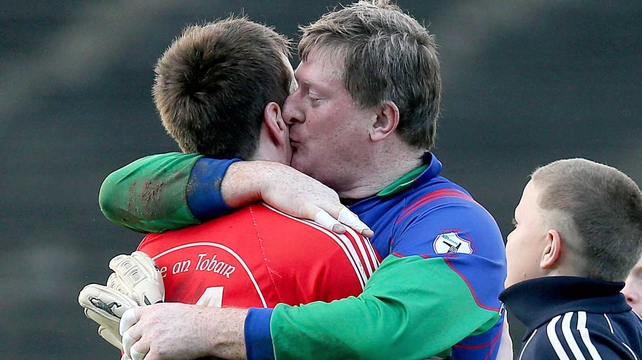 By the 36h minute that lead had disappeared as St Brigid's started the second half like men possessed. A Frankie Dolan special started them on their way, before the former Roscommon county star added another two from dead balls to level the game.

Alan Dillon landed two points in a minute for Ballintubber in the 40th and 41st minutes to settle the Mayo champions, but an excellent goal from Karol Mannion midway through the half gave St Brigid's the lead.

The 2013 All-Ireland champions were the stronger side at that juncture and it appeared as if they would ease to the win on the back of that dominance and their vast experience, but Ballintubber kicked again in the closing stages.

Points from Padraig O'Connor, Alan Plunkett and the wonderful Stephen Broderick opened out a two-point lead and when Cillian O'Connor hit the net in the 51st minute the victory was theirs.