St Galls started in whirlwind fashion and rattled off six quick-fire points in the opening ten minutes from a range of distances and angles; Clontibret were left chasing shadows.

That, though, was to be the highlight for the Antrim champions in the first half - they failed to score again, due to a combination of good defence by Clontibret but also a degree of poor finishing by themselves.

Clontibret had their first attack in the 12th minute and two minutes later they opened their account from a Conor McManus free.

However, McManus’ usual clinical finishing deserted him on a couple of other occasions.

Brian Greenan reduced the margin to four points in the 16th minute, pointing when Galls keeper Chris Kerr managed a great save to deny him what looked a certain goal.

As Clontibret got more involved out around the middle further chances accrued but they failed to convert these. They did open the St Galls defence again for a clear-cut goal chance but Ryan McGuigan’s effort was blocked.

With five minutes of normal time left Vincent Corey finished off a fine move to reduce the margin to three and while there were chances at both ends that was how it stood at the break, St Galls 0-6 Clontibret 0-3.

If the first half was entertaining then the second was electric as fortunes ebbed and flowed.

It was Clontibret who started the better picking up from where they had brought themselves in the second quarter to register four unanswered points in the opening nine minutes to take the lead for the first time.

They only trailed once thereafter and it was St Galls now who found themselves fighting for survival. They were down reduced to 14 men through the dismissal of Jackson McGreavey on a straight red card.

St Galls led briefly with 11 minutes remaining but Clontibret were now dictating the game, with points by Conor McManus and substitute Aodh Curran putting them back in front.

Pollock equalised for the Antrim men but Clontibret showed nerves of steel in the closing minutes to again soak up the pressure and just when extra-time looked certain McManus popped up with the winner to send the pre-match favourites crashing out. 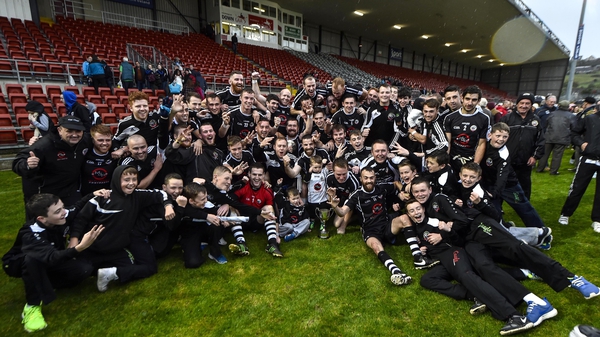