Colm Cooper has called on Kerry to build on their All-Ireland success and not allow another gap of five years between Sam Maguire titles.

The Dr Crokes man missed the entire season with a knee injury but was on the sideline to see the Kingdom claim their first win since 2009, and their 37th in total, with a three-point win over Donegal in Croke Park on Sunday.

“Hopefully, this is a platform for more,” the 31-year-old told RTÉ Sport.

“[Winning the All-Ireland] is fantastic and everyone’s going to enjoy it and we’ll enjoy it for the rest of the week, until Christmas.

“But we have to set the bar high for ourselves. We’ve got to be back here every year, no more skipping years.

"I think the squad is there. They’re young, hungry players and I hope we’ve no retirements and we go on and drive on."

"We’ll enjoy it for the rest of the week, until Christmas"

Although Cooper missed out on the action he said he felt like he kicked and caught every ball from the sideline.

"I felt like I played out there. It’s just marvellous for Kerry and I’m so proud of the lads. I didn’t get a chance to get out on the field with them but I was with them all year long. They just promised so much and they delivered," he said. 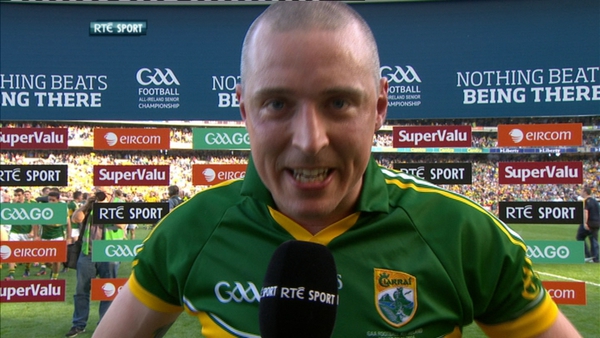 VIDEO: 'Joe Brolly, what do you think of that?'