Footballer of the Year Michael Darragh Macauley has admitted he isn't "naturally gifted" yet never doubted his ability to become one of Gaelic football's most effective players.

Macauley is expected to play a key role again for Dublin on Sunday when they face Donegal in the All-Ireland football semi-finals.

Along with goalkeeper Stephen Cluxton and full-back Rory O'Carroll, the powerful midfielder is a player Dublin simply can't afford to be without.

But the two-time All-Ireland medallist admitted his game has always been more about perspiration than inspiration.

He said that countless 'superstars' he encountered as a teenager have not made it to the top while he emerged as a relative late bloomer through hard graft.

"Talent is over-rated, I would have always stressed that from a young age," said Macauley. "Hard work will always beat talent.

"Some lads just haven't been able to put it in, for millions of different reasons. A lot of the guys who I grew up with were superstars when they were 18 but are nowhere to be seen now.

"Sometimes it's the luck of the break, sometimes it's attitude. I always had the highest expectations for myself and you always should. I always backed myself in everything I did. It's not a cockiness. It's just a sort of a self belief thing."

"Talent is over rated, I would have always stressed that from a young age"

Macauley wasn't picked for success as a teenager and watched many Dublin games from Hill 16 with supporters. But his determination to succeed eventually caught Pat Gilroy's eye in 2010. Now, at 28, he's closing in on a third All-Ireland final appearance.

"Working really hard, I'll always back myself with that sort of stuff" continued Macauley. "It's not because I'm a naturally gifted player. It's because I work harder than the guy next to me. That's what has gotten me anywhere I've gotten in the game."

Macauley picked up his first All-Ireland medal in 2011 and Dublin beat Donegal in the semi-final along the way. They had to overcame a blanket defence system from Donegal that day and many expect a similar approach from Jim McGuinness' side this weekend.

"I think we've been to a lot of these difficult places before and we've gotten over the line and I think all that stuff is in the memory bank now," said Macauley.

"It's good for us, it's driving us on. If we do find ourselves in bad positions against Donegal or whoever, we know we're able to come back. We have proved that over time.

"We were very happy at the end to come out with a result. It definitely wasn't easy and I'm sure it won't be easy on Sunday."

Dublin Gear Up For Semi-Final 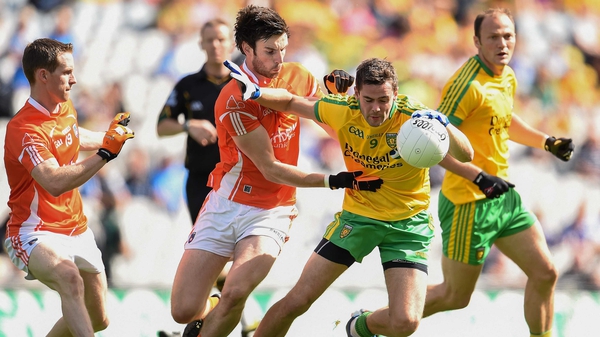