Kerry and 14-man Mayo finished level on 1-16 each in an epic All-Ireland Football Championship semi-final at Croke Park.

Eight different players were on target as Kerry moved ahead by 0-09 to 0-05 by half-time, with the westerners losing Lee Keegan to a straight red on 33 minutes.

Mayo’s passion brought them back, and they went ahead with Cillian O’Connor’s 59th-minute penalty goal.

But Kerry reeled them in and sub Kieran O’Leary kicked a stoppage-time equaliser to force a replay, scheduled for the Gaelic Grounds next Saturday.

In front of a crowd of 52,495, Stephen O’Brien’s artistry produced two early scores, one stroked over by himself after just 17 seconds, the other created for James O’Donoghue.

But the sides were level on three occasions inside the opening ten minutes, with Cillian O’Connor hitting two, winning his battle with Shane Enright in those opening stages.

Both sides missed golden goal chances. First O’Connor did everything but put the ball into the net, rounding goalkeeper Brian Kelly, but failing to get his shot on target.

Moments later, Paul Geaney should have done better when he blazed wide with just Rob Hennelly to beat.

Keith Higgins stuck tight to O’Donoghue, and their propensity to carry the ball into the tackle led to Kerry attackers being penalised on a number of occasions for over-carrying as Mayo’s masses of defensive bodies closed in.

The Kingdom were also set up defensively, with Geaney often isolated up front with little or no support, and however alien to their tradition, it was extremely effective with the Connacht champions held scoreless for 17 minutes, until wing back Lee Keegan pushed forward for a point.

By that time, Kerry had kicked on with scores from Donnchadh Walsh, Paul Geaney and Michael Geaney and were growing into the game. 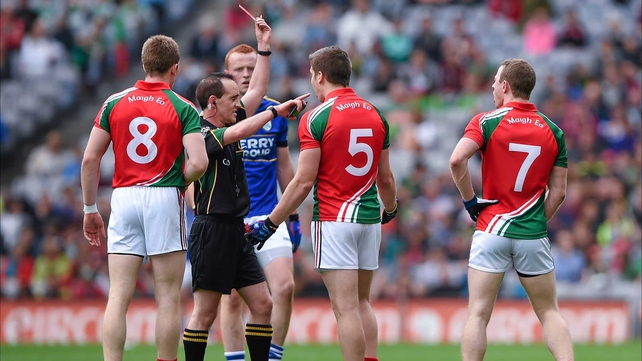 Mayo suffered a huge blow on 33 minutes when Keegan was sent off on a straight red card for kicking out at Johnny Buckley, and after David Moran had for the second time split the posts from distance, they took a 0-09 to 0-05 lead into the interval.

But Mayo committed extra men to the offensive effort, and narrowed the gap with a handful of O’Connor frees and an inspirational Colm Boyle effort.

Aidan O’Shea rose to the occasion with his power and purpose, and with a frenetic workrate, they stifled and frustrated their opponents.

They were level by the tenth minute of the second half, after O’Connor and Dillon had fired over points.

Driven by passion and fervour, James Horan’s men fell behind again to Donnchadh Walsh’s second score, but wasted no time in going level for the sixth time through Jason Doherty.

The O’Shea brothers, Colm Boyle and Donal Vaughan drove repeatedly through the heart of the Kerry defence, with Tom Parsons also off the bench to lend a valuable hand. 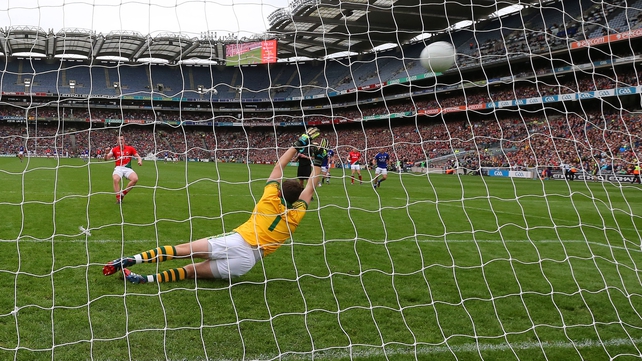 And they made a vital breakthrough when Vaughan won a penalty that O’Connor blasted to the net in the 59th minute.

The Kingdom kept in touch with scores from Peter Crowley and Bryan Sheehan, but it was substitute Kieran Donaghy who made the difference as they pulled the game out of the fire.

Donaghy won important ball in the air, and provided the pay-off for O’Donoghue’s 68th-minute goal, before another substitute, Kieran O’Leary, hooked over the stoppage time equaliser. 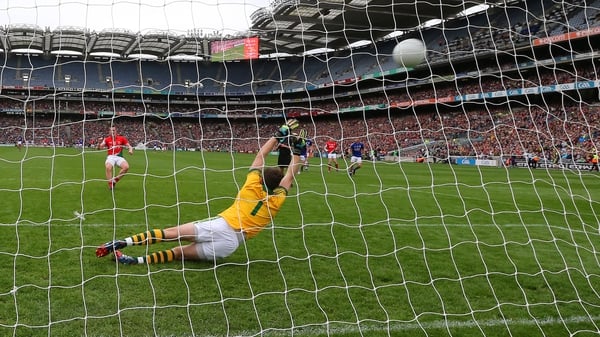