Cork football manager Brian Cuthbert has described their meeting with Sligo in Saturday’s round 4A footballer qualifier in Tullamore as “our All-Ireland final”.

While accepting that his side are favourites to advance past the Yeats County, Cuthbert is nevertheless viewing the O’Connor Park clash as an opportunity for redemption following the heavy defeat by Kerry in the Munster final.

The Rebels came in for much criticism in the provincial decider. “Spineless” and “shambolic” were some of the words used to describe the performance.

Now comes the chance to make amends. Cuthbert has made wholesale changes to the side for Saturday’s game. Youth is given its chance, and established names like Fintan Goold and Daniel Goulding have to make do with a place on the bench.

“The Kerry defeat was a bitter pill to swallow but we are fortunate now to have another chance," Cuthbert said in an interview with RTÉ Sport.

“We have this game [against Sligo]. It’s our All-Ireland final. We are going into the game as favourites but it will be a massive battle for us.

"If we win the game we’re in Croke Park on the August Bank Holiday weekend and that’s where we wanted to be from the start of the year. We’ll then face Mayo and that will be another tough battle

“Whatever way you get to the August Bank Holiday weekend, it doesn’t matter.

“For us we need to get the cards marked up again after what we produced against Kerry."

Cork’s no-show against the Kingdom on 6 July left many pundits puzzled.

For Cuthbert and the squad, it was cause of much disappointment that they failed to sparkle against their bitter rivals. Arising from that, the manager has freshened things up for this weekend.

“I think we were definitely flat against Kerry,” Cuthbert said.

“We couldn’t get our hands on the ball and we left ourselves too open at the back. Once you give Kerry space, they are best in the country at opening teams up.The score was what it was.

"As a group, and I include management and players here, we accepted that what we did [against Kerry] wasn’t good enough in terms of intensity and what we wanted to do. After the game, we were very despondent.

“But we got back training the following Tuesday and Wednesday; thrashed things out a bit and moved on from there.”

As for his team selection for this weekend, the Cork boss explained: “We’ve changed the team a bit. It’s a reflection on the training done in the last few weeks.

"Fellas are hungry. Some of the guys who have been on the squad for a while have now got the opportunity to make the starting team.

"If you look at the guys that have missed out, some of them are the mainstay of the team. It’s not a case that they’ve been playing poorly, but just that the guys called in, we believe, can do a job for us in this particular stand-alone match." 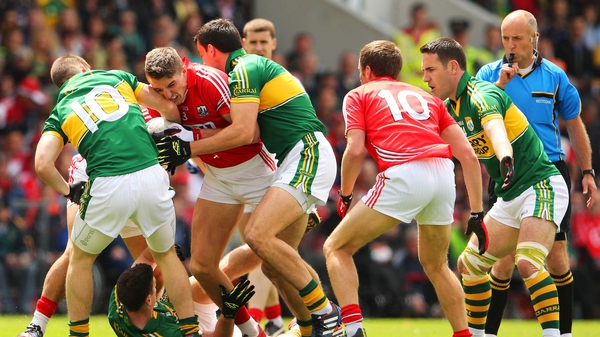 Pat Spillane: 'Cork had a mental breakdown' in heavy defeat to Kerry in Munster football final