Tipperary powered to only their second ever Senior Football Championship win over Laois with a 3-17 to 4-09 win at O'Moore Park, Portlaoise in their third round qualifier this afternoon.

In a gripping encounter, the Division 4 Allianz League champions led by 10 points at half-time, after scoring 1-09 without reply in the second quarter, including a Conor Sweeney goal, to help them to a 2-10 to 1-03 interval lead.

Laois responded strongly on the restart with quick goals from James Finn and Conor Meredith, but it wasn't until the 62nd minute that they drew level, with David Conway bagging their fourth goal.

Laois worked hard late on, but failed to take the lead, as Barry Grogan netted Tipperary's third goal on the way to a five-point victory.

Tipperary manager Peter Creedon had opted to start Ian Fahey in his line-up named midweek, but decided to field the same team which beat Longford last weekend, with John Coghlan coming into defence, and Peter Acheson moving to attack.

Tipperary got off to a glorious start with Sweeney netting his sides opening goal after just two and a half minutes, delivering a low shot past Laois keeper Graham Brody, after a well placed pass from Grogan.

Little separated the sides early on, with Laois finding the net through John O’Loughlin to hand them a 1-01 to 1-00 lead after seven minutes.

As the rain belted down Laois moved two points clear, with Niall Donoher and Billy Sheehan responding to a Michael Quinlivan score.

However, Tipperary suddenly gained control in all sectors, as the hosts totally struggled to cope with Creedon’s charges.

The visitors were firmly on top, and went on to register 1-09 without reply before the interval.

Sweeney kicked started this excellent run of scores to bring his tally to 1-01 in the 14th minute, before a quick-fire Quinlivan effort drew the game for the second time.

Brian Fox got in on the scoring act, as he claimed Tipperary’s third point inside 90 seconds to give them a 1-04 to 1-03 advantage and a lead they wouldn’t relinquish.

The hosts were under huge pressure defensively, but were doing well not to leak another goal, with Tipperary handed four goal-scoring chances inside the opening 14 minutes. 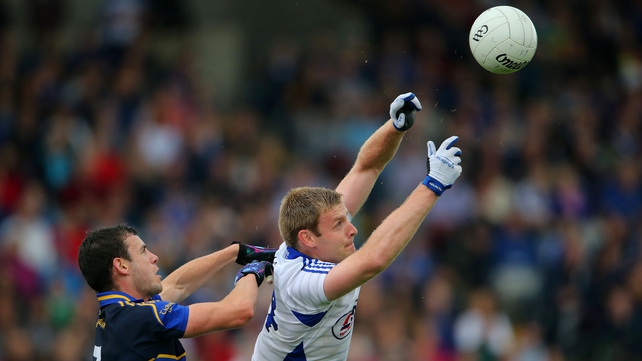 However, the Premier County weren’t lacking in the point-scoring stakes and registered four unanswered points between the 17th and 23rd minutes, with Colin O’Riordan, Philip Austin and Quinlivan on target.

These scores handed Tipperary a 1-08 to 1-03 lead, but they didn’t easy up and quickly found a second goal, as Sweeney once again rattled the back of the Laois net.

The Ballyporeen clubman’s effort opened up an eight-point gap, while at the opposite end Laois captain Ross Munnelly was struggling with an injury.

Munnelly was eventually substituted in the 28th minute adding to Laois’s woes.

Scoring chances increased for the hosts before the break, but they amassed six wides but the interval, with the usually accurate Darren Strong sending four of these efforts astray.

Tipperary finished the half strongly, as points from Fox and O’Riordan helped them to a 2-10 to 1-03 interval lead.

This also resulted in some positional switches with Colm Begley moving to the half-forward line and James Finn lining up at midfield alongside O’Loughlin.

And Tomas O Flaharta’s charges began the second half in inspired fashion, creating a trio of goal-scoring chances inside six minutes of the restart.

The O’Moore’s capitalised on two of those opportunities, with Finn netting in the 38th minute, and Conor Meredith completing the Laois hat-trick to ensure a 2-10 to 3-03 score-line with 41 and a half minutes gone on the clock.

But Tipperary fought hard and responded with four quick points to take a 2-13 to 3-04 lead by the 48th minute.

Laois had lost defender Robbie Kehoe on a black card at this stage and were hit with a further blow with 18 minutes remaining, as they lost Colm Begley, after the Parnells clubman turned awkwardly picking up a calf injury.

The hosts cut the gap to four points as Donal Kingston claimed his second score of the half, but a fourth Philip Austin point ensured Tipperary were 2-14 to 3-06 in front.

An inspired goal from substitute Conway aided a Laois comeback, with the hosts drawing level, following points from Evan Costello and Conway.

However, Laois only managed one further score - a Kingston pointed free in injury-time, as Tipperary took a firm hold in the closing stages.

Grogan claimed a point, with Sweeney also slotting the ball over the cross-bar, while Aherlow clubman Grogan registered the games seventh goal in the 69th minute, as five points separated the sides at the full-time whistle, and Tipperary booked a rare place in Round 4 of the All-Ireland qualifiers.