Wexford and Laois played out a thrilling All-Ireland SFC round 2A qualifier at Wexford Park with the midlanders emerging as 0-18 to 0-17 winners.

The sides were level on 10 occasions with Laois, who had a goal effort from Ross Munnelly hit the crossbar, leading 0-11 to 0-10 at half-time.

Wexford were two points ahead with eight minutes left, but two MJ Tierney frees and a superb 69th-minute winner from Niall Donoher got Laois over the finish line.

The O'Moore men's late surge sealed a ninth win in their last 10 qualifier outings, while they were ending Wexford's interest in the Championship for the second year running (12 months ago they won 0-16 to 2-08 at the same venue).

Wexford had held sway in the early stages this afternoon and led by 0-06 to 0-02 after 14 minutes, with Graeme Molloy and James Holmes converting some delightful points.

However, with the wind advantage, Laois quickly bounced back and with impressive midfielder John O’Loughlin scoring three fine points from play they nipped in front by the interval.

On the 20-minute mark the Wexford goal had a miraculous escape when Munnelly's goal-bound shot came back off the woodwork and into the grateful arms of Wexford goalkeeper Shane Roche.

In similar fashion to the opening half, the Model men were the better side on the resumption and by the end of the third quarter they led by 0-15 to 0-13 with centre forward PJ Banville chipping in with three excellent points.

In a game characterised by some excellent point-taking - notably from Laois' O'Loughlin and Donoher, and Lyng and Banville for Wexford - few would have argued if this qualifier clash had gone to extra-time.

Crucially though, after their exertions against Dublin last weekend, the hosts wilted in the closing stages as they lost their grip on a two-point advantage set up by Ben Brosnan's well-struck '45'.

Ironically, the two crucial equalising scores from frees for Laois came from Tierney, who only came onto the pitch as a black card substitute for Damien O'Connor. Donoher then followed up with the decisive score as Tomás Ó'Flatharta's charges booked their place in the round 3A draw. 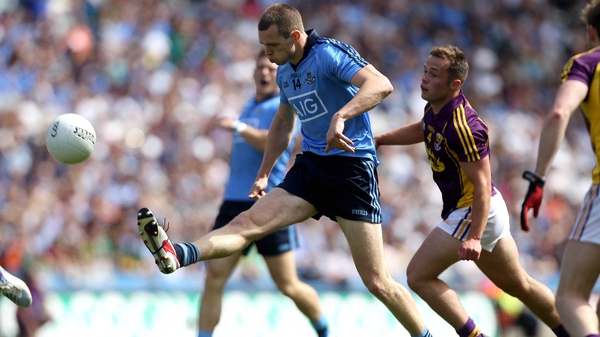