Hosts Cavan held off stubborn Westmeath with a strong second-half performance to seal a 1-15 to 1-14 Al-Ireland SFC Round 1B victory.

Last season's All-Ireland quarter-finalists trailed by two at half-time and left their fans frustrated at Kingspan Breffni Park with just six points at that stage.

But a 1-5 scoring burst in the first 15 minutes of the second-half ultimately pushed them into a winning position that they just about held onto.

There were some nervous moments late on and Cavan's seven-point lead after 57 minutes was reduced to just one at the finish as Westmeath rallied and netted through John Gilligan.

But Terry Hyland's Cavan held on to avoid extra-time and secure a place in the next round of qualifiers.

Both sides made changes to their line-ups before throw-in though Westmeath in particular.

Boss Paul Bealin made four switches from the side previously announced with Denis Glennon a high profile absentee due to hamstring trouble.

He was replaced by Aidan Burke in the full-forward line while Stephen Gallagher, Gilligan and Lorcan Smyth came in for Darren Quinn, Kieran Gavin and Ray Connellan.

As for Cavan, Killian Brady replaced Alan Clarke in the full-back line.

Westmeath took a narrow 0-7 to 0-5 half-time lead though neither side impressed in a half that contained 27 frees, split virtually evenly between the two.

Both sides operated with two-man full-forward lines meaning much of the play was bunched and clogged around the middle with continuous hand passing.

It made for a poor spectacle and particularly so as scoring chances were so hard to come by.

The difference early on was Westmeath's ability to capitalise with the wind at their backs and pick off points from distance.

Veteran Des Dolan took their first after selling Cavan's defence a neat dummy while Callum McCormack and Ger Egan scored two fine points each from well outside the 20 metre line.

Cavan weren't making any apologies for a defensive set-up that saw corner-forward Martin Reilly operate as a sweeper. It's a system that got them to last year's All-Ireland quarter-finals.

In Westmeath's case, they simply couldn't afford to go all out attack as progression meant everything to them after a terrible league and a Leinster championship defeat to Louth.

Cavan were a much improved side after the restart, however, and effectively decided the contest with a burst of scoring in the third quarter of the game.

The McDermott strike began a 1-3 scoring burst from Cavan without reply that put them 1-11 to 0-8 clear and in a comfortable position with 20 minutes left.

Cavan moved 1-14 to 0-10 ahead with 13 minutes remaining but endured a shaky closing period as Westmeath rallied and netted through Gilligan.

But the Lake County came up just short as free-taker John Heslin scored one injury-time free before wasted one further great chance. 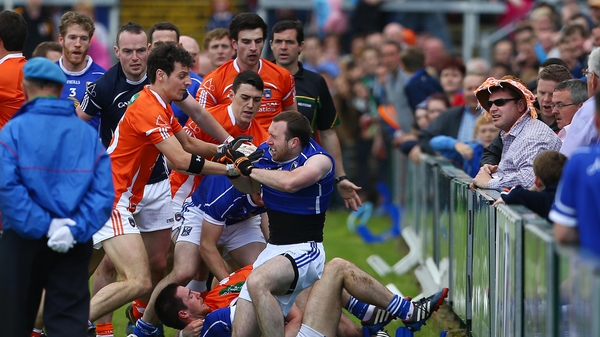